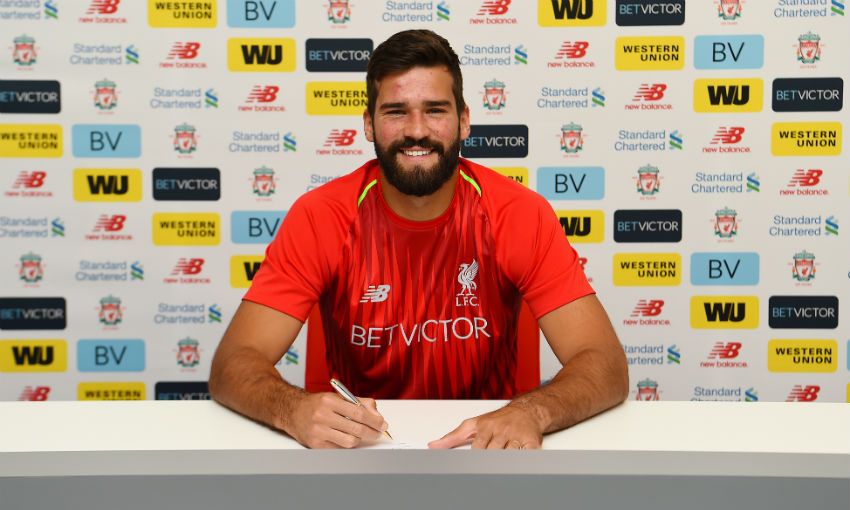 Liverpool FC have completed the signing of goalkeeper Alisson Becker from AS Roma.

The 25-year-old signed a long-term contract with the Reds after undergoing a medical and completing the formalities of his switch at Melwood today.

Upon putting pen to paper, the Brazil international told Liverpoolfc.com: "I'm really happy, it's a dream come true to wear such a prestigious shirt for a club of this size that is used to always winning.

"In terms of my life and my career, it's a huge step for me being part of this club and this family.

"You can be certain that I'll give my all."

Alisson, who began his career with Internacional in his homeland, was Brazil's No.1 at the World Cup in Russia this summer.

That video’s too grainy. Could be Bigfoot or the Loch Ness Monster for all we know.

About time we had a decent keeper. Only good.things can come of this

(massive, massive statement of intent by the club)

No lean once again.

Fekir next.? Best window. Ever.

Alisson: That night at Anfield influenced my decision
Chris Shaw@__ChrisShaw

The atmosphere generated inside Anfield on the night Liverpool beat AS Roma in their Champions League semi-final played a part in convincing Alisson Becker to join the club this summer.

April’s first-leg clash between the sides will take its place as one of the great European evenings at the famous stadium, with the Reds claiming a thrilling 5-2 win – having led by five goals at one point – that put them on course for the final.

Alisson was the unfortunate goalkeeper on the receiving end of Liverpool’s sensational attacking play as the supporters created waves of noise to roar on Jürgen Klopp’s team.

It was an experience that stuck with the Brazil international and, in his first official interview after signing for the club on a long-term deal, he revealed its factor in the transfer.

“Yes, in part it did influence the decision,” Alisson told Liverpoolfc.com.

“When you make an important decision like this it’s not just a decision to change clubs, it practically changes your entire life, my family’s life, my wife, my daughter.

“That game definitely did have an influence but I also watched other games. I’ve seen other games where I could see the way Klopp had the team playing.

“That has made me really excited to be part of this group. Apart from the fact that the club is massive, the players that have come through here and the titles won, hopefully I can play a part in the history being created here, win titles and be a part of the project that has been developed here in the past few years so we can see Liverpool rise once again.”

Liverpool FC have completed the signing of goalkeeper Alisson Becker from AS Roma.

The 25-year-old signed a long-term contract with the Reds after undergoing a medical and completing the formalities of his switch at Melwood today.

Upon putting pen to paper, the Brazil international told Liverpoolfc.com: "I'm really happy, it's a dream come true to wear such a prestigious shirt for a club of this size that is used to always winning.

"In terms of my life and my career, it's a huge step for me being part of this club and this family.

"You can be certain that I'll give my all."

Alisson, who began his career with Internacional in his homeland, was Brazil's No.1 at the World Cup in Russia this summer.
Click to expand...

That shirt looked a bit small on him. Was it the first practical joke? He looks like he's got a sense of humour.
Great signing if true.
L

So we are now back with 3 Brazilians in our squad? Firmino has proven to be much more effective whisperer than Lucas.... we have our own pretty boy to sell shirts, NB will have to pay us more pretty soon.

Oh @Hope in your heart Alisson is lying about the atmosphere, he just doesn’t want to face our front 3 again. That’s what influenced him to come. Hahaha.

Jürgen Klopp on Alisson: 'He's one of the world's best'
Sam Williams@SamWiIliams

Jürgen Klopp simply could not pass up the chance to sign Alisson Becker, who he regards as one of the world's finest goalkeepers.

Brazil international Alisson put the finishing touches to his transfer to Liverpool from AS Roma on Thursday - a move he described as a ‘dream come true’ during his first interview as a Red at Melwood.

Klopp is delighted with the 25-year-old’s arrival on Merseyside and the manager has explained why he decided to make the stopper his fourth summer recruit, after Naby Keita, Fabinho and Xherdan Shaqiri.

The boss told Liverpoolfc.com: “At one point in the last few weeks it came up, the opportunity to sign one of the world’s best goalkeepers - then it’s not a long thought, to be honest, it’s only that you need to have a little talk with the owners! They were quite excited, so we did it.

“It shows the value of goalkeepers, of course, in this moment. It will happen a lot in the next few weeks I guess and that’s it, so we are really happy to have him here now.

“His English is surprisingly good and he is a real personality. He has meanwhile a lot of experience in the last few years, in Europe and in Rome, he’s played there on an outstandingly high level and he did the same at the World Cup.

“It was for Brazil not too lucky, that’s how it is, but then he played a really good World Cup. So it’s just a good moment.”

Klopp went on to praise Alisson’s all-round attributes, but insisted the stopper will need time to adapt to life in the Premier League and can still improve further.

“The full package is just good,” the boss said.

“But that’s not important now because again, we got him here because of his existing strengths, which is in all goalkeeper departments the highest level.

“But of course he still has to adapt and age-wise he can improve, the best years are coming in the goalkeeper life, so it’s all good.”

I'm so excited and happy for this signing! it's hard to say what signing was the most exciting when it happened the last couple of years.. Salah, VVD, Keita, Fabinho etc... but this one for me is the most excited I have been for a new signing and that's saying something

Delighted with the signing.

Another world record fee spent, this time on a GK - I personally hate the ridiculous money that goes around in football these days. That aside, with the market the way it is for players, there clearly being a need for a keeper that is beyond just potential, and there being a very small few available to purchase, it's a fantastic move by the club.

Shout out to Edwards and FSG for once again making a positive move.

Is it greedy to want one more...

Well... what a lean that is... kind of lol A very warm welcome Mr. Becker 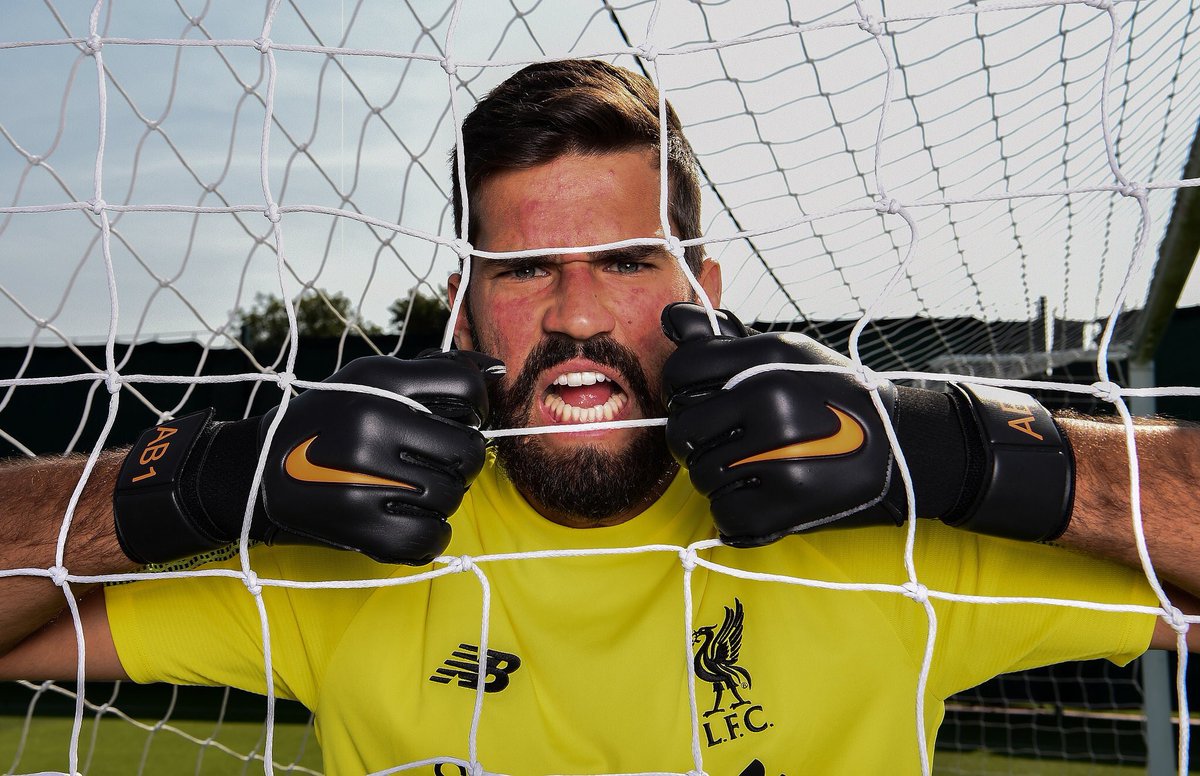 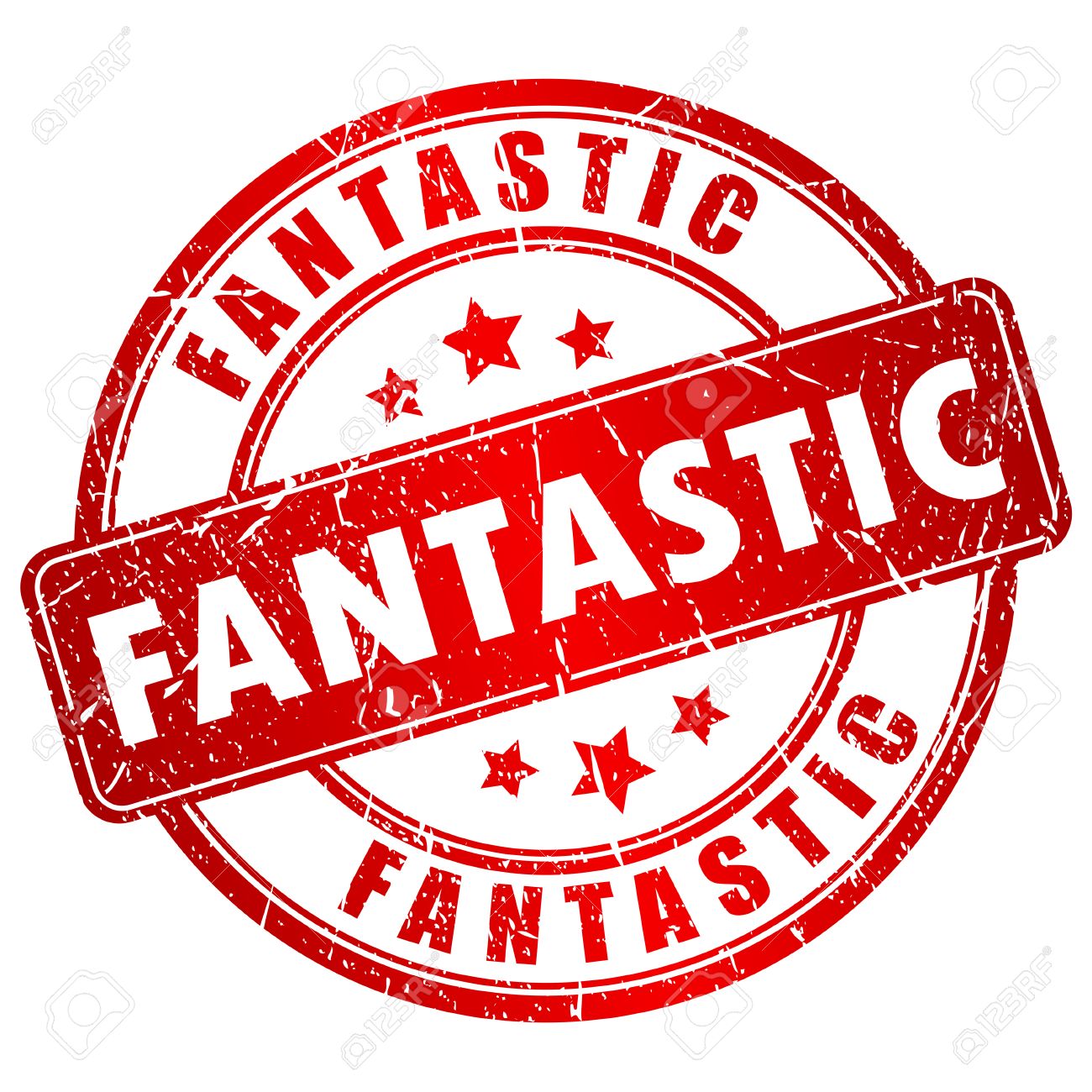 summer 2018 - the greatest transfer window in this clubs 125 years.

THERE WILL BE A REVOLUTION THIS SEASON
A RED ONE

I’ve always hated maths but I fucking love them sums

It's the way in needs to be done to keep up with your rivals in the modern game. Paying that little bit over the odds to get the players you want.
Several years ago this would never have happened.
Superb and unbelievable signing.
R

Best Wishes to you Alisson for a Healthly and Happy time with the Mighty Anfield Reds. YNWA