"if given a choice, which Bayern player would he take, if he had to take just one". Klopp's answer - "Gerd Muller", and a knowing smile followed. The interviewer stopped for a good 2mins, and finally just laughed. 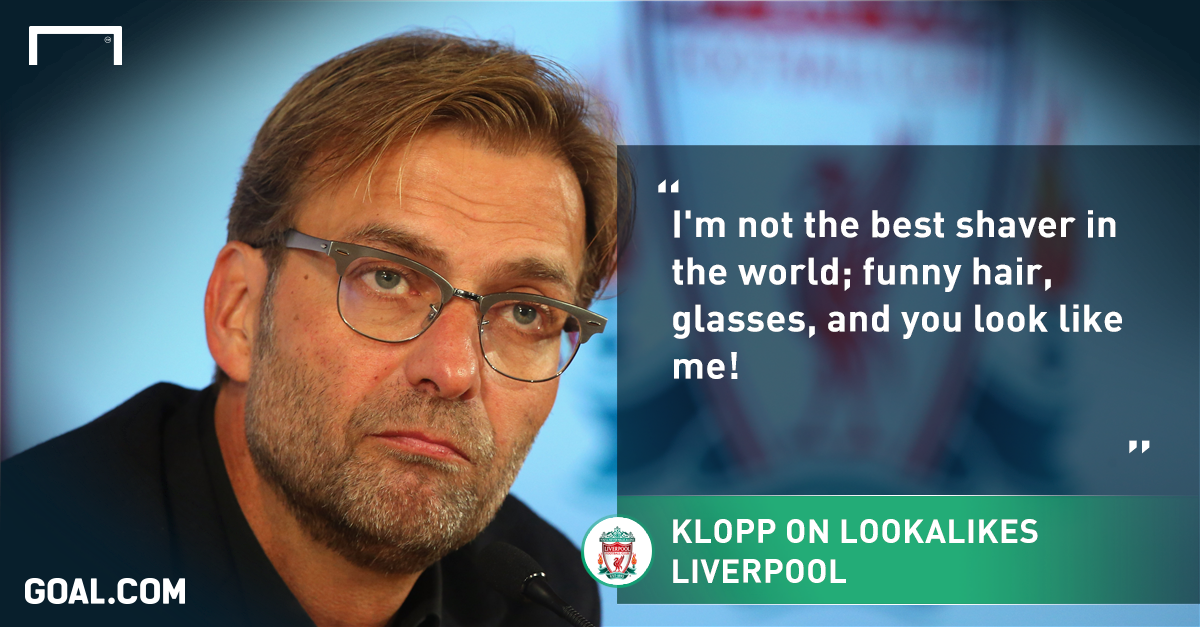 Klopp interjects when Lucas is asked about him: "Will you always ask the players about the manager? If he thinks I'm am idiot he can't say!"

On England's Football Association (FA) regarding Rossiter's injury after 3 full matches in 5 days in qualifying for the Under-19 European Championship:

“These young players are our future. If we handle them like horses we get horses"

This is my first time as manager of Liverpool for a game at Anfield and it is something that will be very important for me and my staff.

You [the fans] have a vital role to play in what we are looking to achieve. You are a very special group of supporters and the atmosphere you create is unique.

I ask that you believe in this team and believe that together we can achieve great things.

We must all stay together and look to enjoy the experience of following such a great club.

Football should be about joy and fun and that must be reflected throughout the entire organisation.

The team will go out and battle for you and look to represent you, the club and the city in how we approach our work: this is my commitment
D 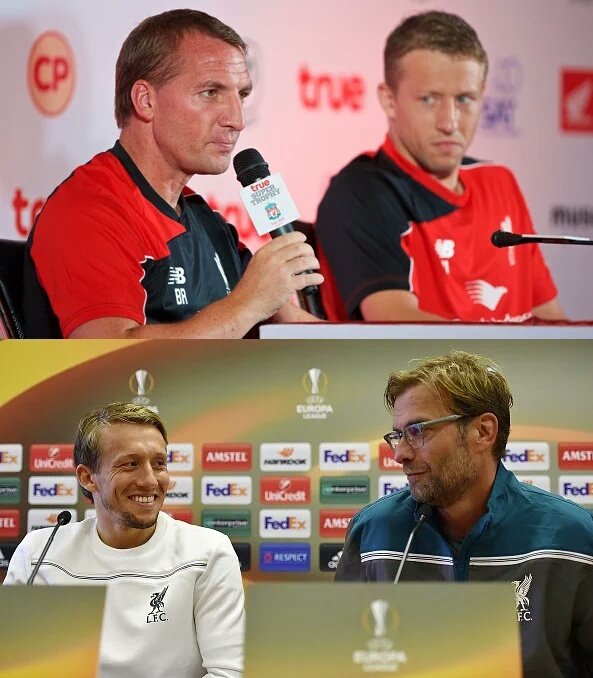 Pictures are capable of telling all sort of lies. But that pair together made me laugh almost as hard as Klopp and Lucas' winks and banter during the press conference.

If nothing else, the team is much, much loser without the building pressure on BR's position to worry about.

loving life as a lfc fan

When you come to a new house you have a present, im not quite satisfied with my present tonight.

Up your game players, he sees all things :wave:

"My only problem is I have to sit here all day and answer questions to you [journalists]."

FIFA Club Champions of The World

Prolix said:
"My only problem is I have to sit here all day and answer questions to you [journalists]."

He never.... said that did he? He is hilarious and entertaining. I really look forward to his press conferences.

Klopp: Jose Mourinho is a nice guy if you're not a journalist

Speaking ahead of his side's Premier League clash against Chelsea, Liverpool manager Jurgen Klopp failed to draw a laugh from journalists in the room with this gag...

Klopp: Jose Mourinho is a nice guy if you're not a journalist

Actually, he said 'if you aren't a journalist or a referee' which makes it even better... lol

"They're like the Chinese in business: they see what other people are doing and copy it – just with more money."

Klopp is eminently quotable and he was reminded of one of his oft-repeated phrases about wanting to play “heavy metal” football at former club Borussia Dortmund when asked how he would describe Liverpool’s musical style.

“The problem in my life is I say too many sh*t things,” said the German, reducing his audience to laughter.“I don’t know, we have to work to create a new kind of music but we are in a good way.”

While talking to a reporter after winning the Bundesliga.

Reporter - There are so many friends here - perhaps 100,000…
Klopp - This is the best thing that comes from sport - the chance to make so many people happy.
W

I like this interview. Maybe @Dortmund fan can explain the background for it?

At one point, Klopp asks the journo something like "Do you know of any available 3 room appartments in Bremen?" - the journo says, "I don't have an any - are you looking for one?" and Klopp replies "no".

Walter Sobchak said:
I like this interview. Maybe @Dortmund fan can explain the background for it?

At one point, Klopp asks the journo something like "Do you know of any available 3 room appartments in Bremen?" - the journo says, "I don't have an any - are you looking for one?" and Klopp replies "no".

I can explain it if you like. The journo is Arnd Zeigler a satirical football journo who is working for a TV station in Germany often interviews players and coaches or simply comments on football news and games. He has his own show called "Zeiglers wunderbare Welt des Fussballs" (Zeiglers wonderful world of Football".
He and Klopp know each other pretty well for some time now and Klopp is usually willing to play a role in these interviews. And you are right he is asking if the journo had a 3-room appartment in Bremen. You are also right with the first part of his reply saying "I don´t have any." But he didn´t ask if he is looking for any but asking: "Und sonst so?"
Which basically means: "You got anything elso going on at the moment?"

There is one more interview with him which is even more funny. It was done at a time when Dortmund was topping the league and destroying every opponent. Zeigler then asks him after the game what is going wrong with his team at the moment. Klopp then acts pretty well and replies that they have problems over problems, the team doesn´t listen to what he is saying, that he feels is isn´t getting though to the players anymore and questions if he would still be the right manager for Dortmund. Really well acted and without even showing a glimpse of a smile the whole interview. That was hilarious. ;-)

Walter Sobchak said:
Thanks @macces82 - this is good humor. Zeigler got acting talent for sure, Jurgen not bad either
Click to expand...

The best part is starting at 1:38 where Zeigler is addressing the age of the goalie Weidenfeller who is "way above 29" (He was 30 at that time I think) and if that wouldn´t be a problem to have such an old team on average. (The whole team was actually brutally young on average at that time)
Klopp then replies that he (Weidenfeller) did "a pretty ok job today" but that you should see him in the morning after he wakes up, that that is a horrible image but that they can´t do anything about it and need to stick with him anyway. So they´d need to continue to put their beer googles on to bear with that face.
He actually used the German expression of "schönsaufen" which is a verb that means drinking exessively in order to let ugly people appear beautiful)

Oh I almost forgot that interview... aaawww such good times back then.

My favourite was at a presser after a BVB public training, at wich Klopp shook his head about a "fan" shouting: "wenn'a 's jetz' nich holt , werd ich Schalker!" ("if you don't win the leauge this year, I'm going to support Schalke04" -> worst rivalery in the Ruhr-area)
Klopp reported that the guy was the only one in 1000 fans who didn't get a signature that day, reasoning:

"I mean, seriously - there were children around- listening!"

The Klopp/Zeigler-stuff is always hilarious, but next to impossible to translate the humor into English. The "critical interview"
including the "match-highlights" are overloaded with typical phrases and analogies, heard a thousand times in such "crisis"-interviews,with the typical serious tone of voice.(Just after BVB had annhiliated Hannover96 away - score 4-0)
My favourite:
"On paper the match today looked like a flat out win with 4-0, but BVB at times played like an away-team, the coach just cannot have liked that"
"No doubt about it, this is why I had to shout alot during halftime - it was just shambolic and we're lucky we got away with it"

Kloppo: “If you think we have too many matches then stop playing at Christmas” 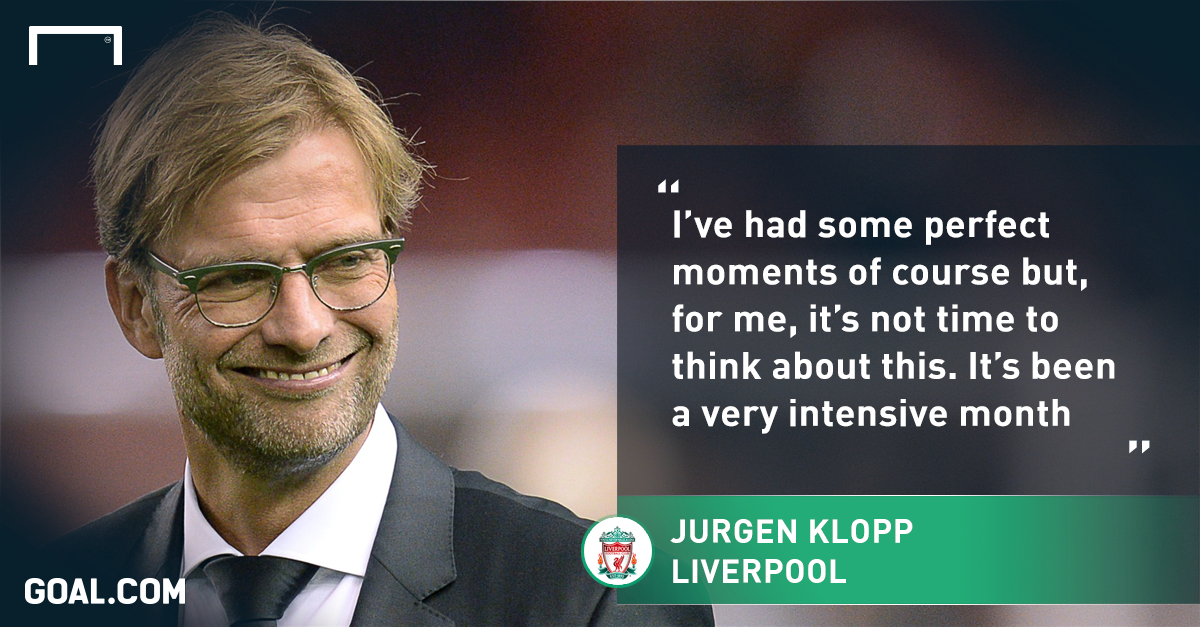 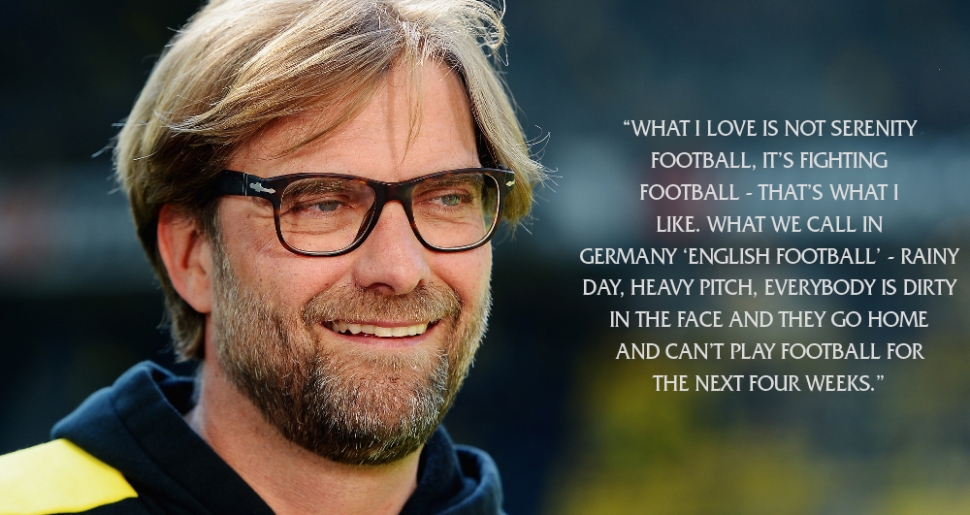 Klopp talking about the time to leave Dortmund. 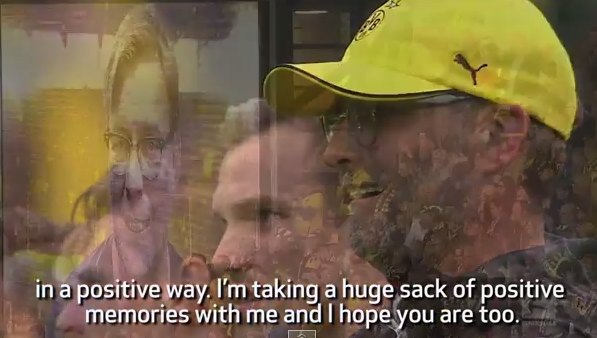 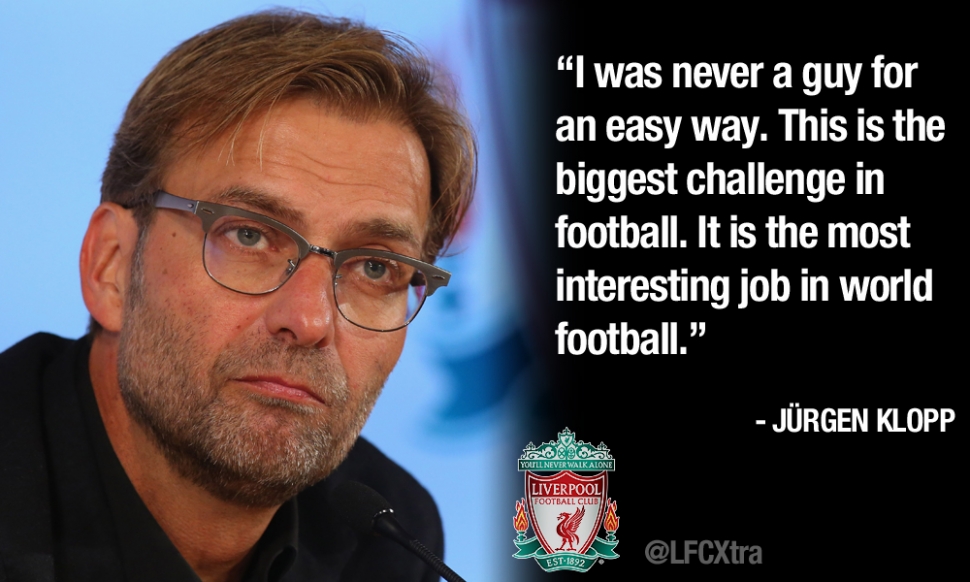 Shortly after taking over, rather than responding to questions on the potential January transfers with a list of names and positions to strengthen, Klopp replied:

“Sometimes I feel I’m the only one in this country who believes in training, only others believe in transfers.”

2 months of Klopp:
The best quotes from the Liverpool boss