Liverpool Injuries - UPDATES ONLY. NO DISCUSSION

Trent back on Merseyside for treatment for a back injury, won't feature for England:

Liverpool star pulls out of England squad with back injury

Alexander-Arnold is the latest to pull out after John Stones, Fabian Delph, Ruben Loftus-Loftus-Cheek and Luke Shaw all withdrew

Liverpool's Van Dijk fit enough to face Southampton - sources
Liverpool defender Virgil van Dijk is expected to be fit to play in the Premier League clash with former club Southampton on Friday, sources have told ESPN FC, despite suffering an ankle injury in the closing stages of Sunday's 2-1 victory against Tottenham at Anfield.

The 27-year-old has been a crucial figure for Liverpool in their title challenge this season after becoming the world's most expensive defender following his £75 million arrival from Southampton in Jan 2018.

But although he was limping heavily towards the end of the Spurs victory, Liverpool are confident Van Dijk suffered nothing more than bruising, rather than ligament damage, after receiving a kick on his right ankle.
http://global.espn.com/football/liverpool/story/3813872/liverpools-van-dijk-fit-enough-to-face-southampton-sources
Click to expand...

After starting against Porto at Anfield, Lovren was left out of the travelling squad for the second leg in Portugal after suffering with a bout of illness.

"Dejan is ill. He had a bad night, the Doc was there and he had no chance to travel. That is the reason for that."

Adam Lallana
The playmaker missed Liverpool's recent clashes with Southampton, Porto and Chelsea with an unspecified knock but was named in the travelling squad for the Champions League quarter-final second leg in Portugal.

"Adam is back in the travelling squad, we have to say. Because we have two players more, we will see what happens. Usually if nothing happens, it would be a little bit too early. But it was very positive, it was quick.

“But we have to see, you are I don’t know how many kilometres away from home and you cannot make quick decisions on matchday and say, ‘OK, we bring him in.’ We need to be prepared as well as possible and that’s why we have him in the squad."

Jordan Henderson
The Reds skipper limped off against Chelsea with an ankle injury but was still included in Liverpool's travelling squad for their Champions League quarter-final second leg against Porto.

"Hendo is all fine. The other players are all fine, that’s really good. Nothing happened. We all have knocks and Hendo got a knock, but that would never take him out."

Joe Gomez
Joe Gomez is closing in on a return after he underwent successful surgery having suffered a setback on the fractured leg he suffered during Liverpool's win over Burnley back in December.

The defender is available for selection and was named on the bench for the Champions League quarter-final first leg against Porto, before completing an hour for Liverpool Under-23s against Leicester City.

However, Jurgen Klopp is unwilling to rush the defender back while he's short on fitness.

"It's better for Joe to have more sessions. If we have enough we shouldn't think about Joe for next one or two weeks."

Alex Oxlade-Chamberlain
Following nearly a year on the sidelines after suffering an ACL injury against AS Roma last season, the midfielder has recovered from the setback that cut short his return for Liverpool Under-23s against Derby County.

Limping off with a hamstring injury, Oxlade-Chamberlain returned to play 45 minutes for Liverpool Under-23s against Leicester City.

However, the goalkeeper is unwilling to rush the England international back following such a lengthy spell on the sidelines.

“Today he has a lower [intensity] day and tomorrow a high-intensity day. It’s all about him in the long-term, that’s what we have to consider first." 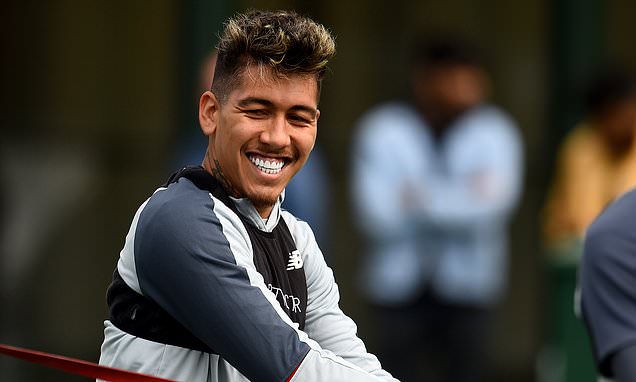 The striker missed Friday's win over Huddersfield due to a 'slight muscle injury' and was considered a doubt for the trip to Spain, but the 27-year-old now appears to have a fighting chance.

"He's here. He trained today. Tomorrow we have another session and maybe I have to make a decision."

Midfielder Fabinho is available again after sustaining a head injury at Cardiff on 21 April.

Both players were included in the 23-man squad for the Nou Camp showdown (20:00 BST).

Klopp added that Firmino's recovery "looks good so far" and he has until lunchtime on Wednesday to prove his fitness.

"We all knew from the beginning it would be a race," said the Anfield boss, whose team are vying with Manchester City for the Premier League title.

"We don't have to make a decision today because there's no game today, we can wait.

"I have to make that decision after lunchtime tomorrow."
https://www.bbc.com/sport/football/48112154
Click to expand...

Not the best news! "Naby Keita is reportedly set for up to a month on the sidelines with injury, meaning his debut season with Liverpool is almost certainly over."

Naby Keita out for remainder of season!

The latest on Mohamed Salah's head injury ahead of Barcelona clash 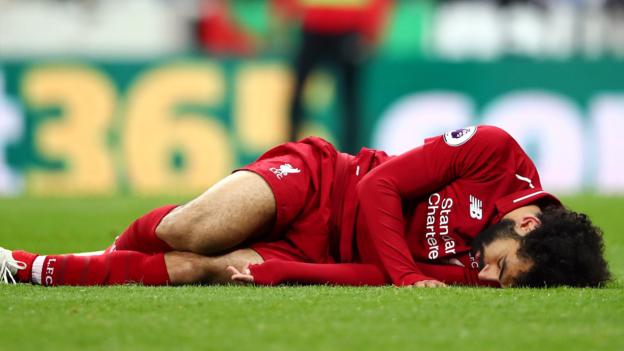 Liverpool will be without Roberto Firmino and Mohamed Salah when they face Barcelona at Anfield on Tuesday.

Salah, Henderson and Robertson all fit for Sunday. Firmino still out with a groin injury.

Edit: Heard it from BBC Radio who presumably got it from Klopp's presser. For a link here's a tweet from Bascombe

Liverpool forward Roberto Firmino has stepped up his rehab as he wins his fight to be fit for the Champions League final.

The Brazilian missed four of the Reds’ final five games of the season, due to a thigh tear.

Firmino, named in Brazil’s Copa America squad this week, picked up the injury prior to the 5-0 thrashing of Huddersfield on April 26.

He played through the pain and managed 12 minutes in the semi-final first leg loss to Barcelona , but struggled and hasn’t featured since.

His recovery has been carefully monitored, and he duly travelled with the squad for a training camp in Marbella this week.

There he has been working intensely with with Liverpool's strength and rehabilitation assistant David Ridings and also physio Sven Kampmann.

He has stepped up his work in the gym and has also been increasing his range of movement, with short, sharp sprints, on the training field.

Liverpool boss Jurgen Klopp remains confident that Firmino will be fit to face Tottenham in the final in Madrid on June 1.

Speaking after the final day of the Premier League season, Klopp said of his No.9: “We have time before the final and that should be enough."

“Naby is, I would say, a bit ahead of schedule, but that doesn’t mean anything for the final. He is now doing straight runs and all of that stuff, he feels comfortable with 50 per cent intensity and these things – but there is still a way to go.

“I know about the issues with Guinea and stuff like that; we don’t want to keep a player out if he can play – maybe they think it is like this, but it is not like this. For me, it would be good if Naby would be 100 per cent fit and could play the Africa Cup of Nations, to be 100 per cent honest. But we don’t know, we will see, and we need to work together with their medical department because in the end, a player who is fit – from my point of view – who can play, should play for his country.

“If he is not 100 per cent fit, he cannot play. That’s how it is. It is not important whether you play for your country or your club. That’s what we try to make sure. It looks good, very positive and we will see if there is a chance.”


“Bobby looks really good [and] he is now part of training,” said the boss on Wednesday. “It was not too long out, but of course we are still careful and want to make sure nothing happens.

“We have a few days still and want to use them, that’s why he is in, out, in, out. Yesterday, he was only playing as a ‘joker’ [in the small-sided games] but it is good for him, the first step to play football again.

“Today he was in around about 70 per cent of the session. Tomorrow he will probably be in completely, we will see, then hopefully it will be fine.”

Robbo hamstring according to Sky

Reminder: this thread is just for updates. Robbo’s injury can be discussed in the player thread.

Liverpool are facing an anxious wait over the fitness of young striker Paul Glatzel. 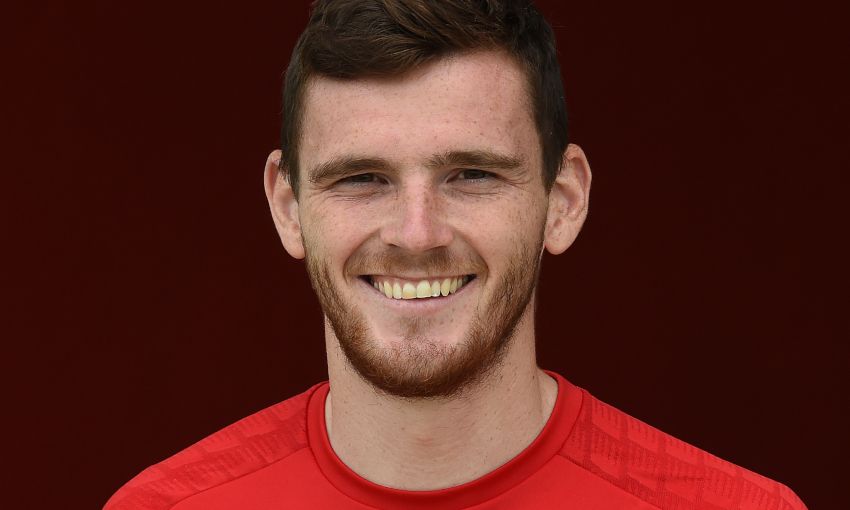 Andy Robertson has undergone a minor procedure on his hand after picking up an infection.