It takes an entirely different picture mode on my tv in order to actually see anything other than neon yellow points of light running around the pitch.

They really are poor those yellow kits.. Thats our third kit so i hope we dont see it too often. The all-black 2nd strip is much better.
L

Libero said:
They really are poor those yellow kits.. Thats our third kit so i hope we dont see it too often. The all-black 2nd strip is much better.
Click to expand...

Someone should get fired for even designing it, let alone produce it.....

Never been impressed with New Balance anyway, they should stick to making shoes. Adidas and Nike are by far the best kit-makers. Would say Puma but their material is stretchy as shit, not good for heavyweights like myself.

Anyone know how much longer we have on our New Balance deal? Would like to see us change to someone else, anyone else. I kinda like Under Armour's designs, maybe give them a shot.

Yeah, there really doesn't seem to be a single season since Warrior/New Balance has taken over where at least one of the three kits hasn't been utterly fucking horrendous (unless you're an Asian fashionista long since banned).

And remember, don't call this yellow - it's not. It's "toxic thunder". 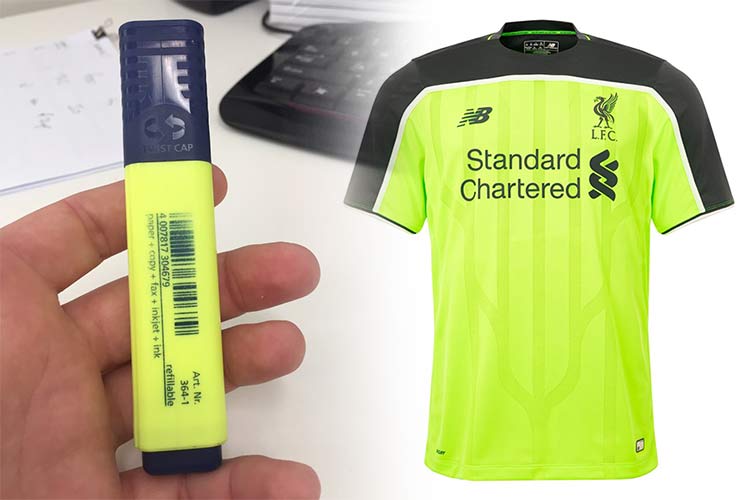 ubermick said:
Yeah, there really doesn't seem to be a single season since Warrior/New Balance has taken over where at least one of the three kits hasn't been utterly fucking horrendous (unless you're an Asian fashionista long since banned).

And remember, don't call this yellow - it's not. It's "toxic thunder".

Good Gods, so that's where they got the idea from - just had a blank design on a bit of paper, picked up the nearest highlighter pen, coloured in the design and went that'll do!

I can honestly say, not counting the home kits, of the 10(?) away/third kits Warrior/NB have done for us since 2012-13, I've only really liked one enough to purchase - and even that one I waited for about 3 years til I could get it cheap on eBay before I bought it. Although I don't mind this season's black kit, so maybe 2 out of the lot in 5 seasons. Their stuff really isn't great at all.

Liverpool's 3rd kit is the best gym top this club has ever produced. It's also good for late night runs to guarantee you don't get run over.

Last year's kits are now dirt cheap on the LFC website - if you want to grab a couple for running etc then now would be a good time. I just bought a complete away goalkeeper set for my younger brother for around £20 including carriage - the home kit is even cheaper.

It's not just New Balance with this toxic colour scheme though. Arsenal have used something similar in their third kit (Puma), Bournemouth have a shade of it on their third kit (JD Sports), it's the colour of choice for the trim on Chelsea's away kit.

And it's not just in England either. The Real Betis third shirt is highlighter yellow (Adidas), as is Bologna away (Macron) and the Montpellier away shirt (Nike).

Even the rugby teams are at it (Leicester Tigers away, Kooga).

Just seems to be the colour choice of the year for sports shirts despite it's limited appeal to the everyday fan who might be wearing them.

rab said:
Just seems to be the colour choice of the year for sports shirts despite it's limited appeal to the everyday fan who might be wearing them.
Click to expand...

Perhaps it's a culture thing (I'm an American), but I don't understand why these are hated so much?

Prolix said:
Perhaps it's a culture thing (I'm an American), but I don't understand why these are hated so much?
Click to expand...

Apart from the fact that this particular colour has absolutely nothing to do with LFC, they are simply goddamn awful. So bright that on sunny days you actually have a problem telling who is who.

Warrior/NB have come out with some bizzare kits but this one takes the biscuit.
Last edited: Sep 9, 2016
E

verde13 said:
Apart from the fact that this particular colour has absolutely nothing to do with LFC, they are simply goddamn awful. So bright that on sunny days you actually have a problem telling who is who.

Warrior/NB have come out with some bizzare kits but this one takes the biscuit.
Click to expand...

I always kind of thought the third kit of any club rarely had to do with the traditional style of the club. I think if you look at the third kit of most clubs it's just an opportunity to step outside the norm.

We are the Reds are you listening

You are all having a go at the Gym top but did you see Man City's last week that was horrendous, was even worse than the one that resembled a setting sun that Barca had a few years back
A

Someones probably already said this but I blame the burnley result on our toxic thunder away kit, i think its jinxed. Anyone remember the green away kit in the early 90's with the 3 white stripes on the shoulder? I was convinced that was cursed too, if I'm not mistaken ronnie rosenthal was wearing at villa when he hit the bar.

It seems FSG wants to dominate the US market with this deal to Nike.

Maybe in 4 years we'll see a Liverpool version of won it at-a-turk stadium said:
It seems FSG wants to dominate the US market with this deal to Nike.

Maybe in 4 years we'll see a Liverpool version of

NB allegedly has a matching clause in current contract stating they can match any offer from a competitor before LFC can accept. This screams LFC knowing how to negotiate the best deal possible. I really love how we've been doing business lately.

From a selfish/personal standpoint, Nike gear fits my person much better than New Balance--which is consistently too small or tight even on extended sizes. However, my supporting an overseas human rights abusing company which is way too big and dominant, doesn't fit me either.

Then again, not certain NB doesn't engage in the same policies, so what do I know?
Last edited: Apr 11, 2019

Liverpool are reportedly in "advanced talks" with Nike over a new long-term kit deal.

It is no secret that the Reds believe they should be getting more money from their supplier and their current deal with New Balance - worth around £45million a year - is set to expire at the end of next season.

Their belief they should be getting more cash is hugely down to the fact Jurgen Klopp 's side are top of the Premier League , recently announced a record-breaking £125m pre-tax profit and after reaching the Champions League final in May last year are into the quarter-finals of the European competition this term to launch another bid to clinch the trophy.

And not to mention they boast some of the world's best players in their squad while having one of the best managers in football at the helm.


Now ESPNFC report Liverpool are in talks with Nike over a new kit deal "expected to exceed the value of Manchester United's £750million agreement with Adidas and become the biggest ever struck by a Premier League club".

The media outlet were told, however, that New Balance have a "matching clause" within their contract which enables them to retain and extend their deal by equalling any rival offer.

But it is Nike who are reportedly leading the battle to secure the Liverpool contract due to their readiness to put the club in the same earnings league as United.

The ECHO understands that discussions are underway with New Balance over a possible extension but Liverpool are also open to offers from rival kit suppliers such as Adidas, Nike and Puma.

The deal is the second biggest in the Premier League , behind Manchester United ’s £750million agreement with Adidas, and will begin next season.

The Reds believe they should be commanding these kind of figures and considering their standing and the fact City have been able to demand this much money will no doubt give Anfield bosses extra ammunition when it comes to negotiating with any potential supplier.

Liverpool have worn New Balance shirts since 2015/16 having previously worked with their affiliate company Warrior from 2012/13.

The partnership has been incredibly successful with the previous two home kits consecutively being the highest-selling kits in the Reds' history .

However, if New Balance want to retain it they will have to offer Liverpool a hefty increase on the current terms.

Called it when Man United got Adidas - though as an ironic joke because I've always loved the three stripes and loathed Nike by their association with Man United. The tables have turned, it seems. Securing a deal of this magnitude is extremely important to club's growth, of course, wherever you turn, there are Nike and Adidas shops, not to mention the hefty increase in the sponsorship deal.

I think New Balance will match whatever Nike are offering - or this is commercial touting via the media...

But about bloody time we got a deal to match the club that we truly are. This will allow us to sign more VVD's and Alisson's - what a difference that calibre of player can make.

Don’t care what it is on the right as long as its a Liver on the left..
L

Yes Adidas or Nike, even Puma if they can afford it would have been much better than New Balance in marketing aspect of it. The deal is going to eclipsed what United signed with Adidas. Of course now we be sharing the same sponsor as Chelsea, and they've just lost Man City to Puma. So far the highest rate goes to United with £75m per season, second will be City with £65m and Chelsea 3rd spot taking home £60m with Nike. They've just signed with them for a £900m deal that runs for 15 years. So it is expected that we should be taking more home since we are still the second biggest English club when it comes to global fan base (not followers!). We should be hoping to see somewhere in the region of £80m per season.

Rather see NB than either Nike or Adidas. Like their shoes much better and love the new home kits. Sharp classic look

I wish our club were in talks with Adidas rather than Nike. I can't stand Nike
L

I care more about who pay us the most. Don’t mind the shirt and shorts from Nike.

Hope we do go with Nike. Not been overly keen on our New Balance kits, and our club merch/training gear has been pretty naff for years imo.
You must log in or register to reply here.
Share:
Reddit Pinterest Tumblr WhatsApp Email Link