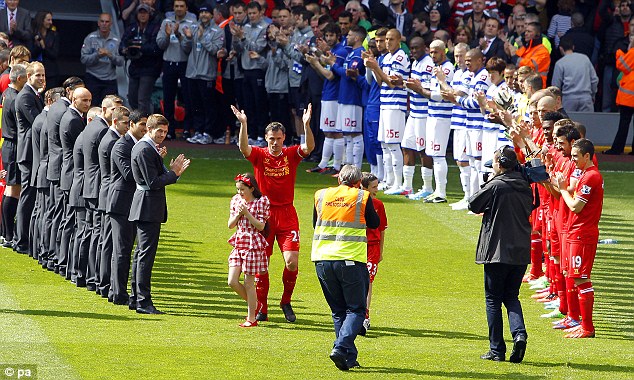 This is the best I could find. Awesome!

Good luck to Carra the legend.

As for the game how many saves did their keeper make. We have a long way to go to qualify for the top4. Huge summer coming up.

Apart from Carra retiring, let's not forget that we haven't won a season finale in 4 seasons. not the most important thing, but ending the season on a high (and what high it was for Carra, 200th clean sheet in the league) is morale-boosting.

I can't help thinking punditry is not the way Carra should've chosen, I've always pictured him among the coaching staff (just like Rio Ferdinand has tweeted).

Nice to end the season with a win for Carra, and also to reach the 60-point mark. Great strike by Coutinho.

Ibe looks very promising; tactically mature for his age and pretty good on the ball. Could get a couple of games next season as well.

I'm practically in tears that the Carra shot didn't sneak in the top corner - what way to bow out that would have been.

Hugely relieved QPR didn't spoil the party, but we shouldn't be worrying about conceding against the lowest scorers in all four divisions. In truth we should have put it to bed before the 30 minute mark. Goal line tech can't come fast enough...

Solid debut for Ibe - I'd be happy next season with Sturridge up top, with Coutinho behind and Suarez running from the right.

Good to finish the season in the right manner and hopefully our good form is continued next year. A tremendously sad day to see one of our best defenders bow out. Carra, forever a legend.

Anyone has a link for the match's highlights?

Match of the Day is on now, mate. You might be able to get a stream if your not UK based.

Really enjoyed seeing Bale getting shafted for that penalty. He deserves that...

Hell of a goal from him though.

ptt said:
Hell if a goal from him though.
Click to expand...

Very pleased that Spurs have missed out on the CL. Much rather have Arsenal there.

Banned for the umpteenth time

A long chapter. He has been through it all...scored two own goals in a match against Man Utd at home...made countless errors as a young defender but has bounced back after every howler and has become a solid defender over the years and a leader on the pitch and a legend. Had a manager who didn't have faith in him till Rafa came along and saw his strenght's and leadership qualities.

He will be missed.
M

It was nice to see that the only goal of the game came in the 23rd min to honour Carra, nice touch Coutinho.

I have some pics of the JC23 mosaic which I'll happily hand over to TIA, will upload them tomorrow.

IBE was OUTSTANDING today, if he'd have shot a couple of times in the first half he could have had some goals. Overall a nice ending to the season and to Jamies last game. couldn't believe it when he hit the post, in my drunken state from the anfield road end I thought it was a great save by Green (should've known better)

Heres to next season

Very pleased that Spurs have missed out on the CL. Much rather have Arsenal there.
Click to expand...

For the hundred millionth time Asrenal nicked it in the end. But good that spurs missed out on CL money and some players who just jave CL as minimum criteria.

Now we also need to see whether they sell Bale and re-invest or invest in a proper striker(Lewondowski/cavani/falcao) with Bale. That will make them hell of a team. The only chance for other teams might be to injure atleast one of these player.
R

Regardless of any negative points, we got the win for Carra, someone behind the scenes should be doing all they can to make him carry on for a next year!

- Home kits for next year look boss
- Not saying much, but Ibe looked better out there in the left than when Hendo has been there most of the season. Good for him
- Carra, legend. Thank you.

Great last game for 23. Despite hitting the post, that was probably the best shot in his career. Other than all of that, I thought Downing played better than he usually does and had a great game today. He found space and used the ball well. It will be great to see what Coutinho will do next year, what a player he is. Ibe had a great debut for a 17 year old. After trying to find wingers for 10 years, it looks like we have two gems in Sterling and Ibe, even though traditional wingers are currently out of style. Excited about the next few years, it was nice to see Suso get on at the end as well. Hopefully the youngsters will continue to progress and we can buy a CB that is decent and we will push on next year. A solid debut season for BR, with signs that there is better to come.

Great farewell to Jamie, and some great pics posted.

Shame that goal of Carra's didn't go in, would have been an awesome bow out.

Roll on next season, let us hope the summer window produces more of the Jan. window stuff.

ChicagoRed said:
- Not saying much, but Ibe looked better out there in the left than when Hendo has been there most of the season. Good for him
Click to expand...

It really isn't saying much considering Ibe is a natural wide player and Henderson is a CM.

Would have been some screamer for Carragher. Unreal if it had of went in.

Played well, nice to get three points another clean sheet. A lot of chances and only one goal would be the main worry there but 3 points and overall a continuation of the good football we have played for most of season.

Season ends, a summer of transfer gossip, not good for the mental health i tells ya.

Banned for the umpteenth time

Why couldn't we play like this for the better part of the entire season?
L

SUPER PORK CHOP said:
Why couldn't we play like this for the better part of the entire season?
Click to expand...

Maybe because we were up against the opponent who is not resigned to the fact that they are already relegated? Some of our opponent still have points to collect to fulfill their league ambition?

You're so negative Eddie! :lol:

Big man love developing for Coutinho , he is like a focused, balanced mix of Suarez and Alonso.

One of our better games this season, some great creativity shown by just about all of our attacking players with Coutinho the standout again.

Excellent debut for Ibe, looks like another top talent...we are shaping up to have an embarrassment of riches on the wings in the next few years.

Big thanks to Carra for all the years of service, would have flipped my lid if he scored that goal, prolly never hit one so sweet in his life up till that point just about fell off my chair. Great job by the fans to give him a big send off and hope to see him back in the coaching staff in the years to come.

Bring on the next transfer window and next season think we can have a real shake at a top 4 finish, really feels like we are going places, haven't been this optimistic for many years.
D

Good finish to the season, clean sheet for Carra and a good send off for him.