No one has mentioned it, but if I am not wrong, after 18 games, we have the least goals conceded and greatest goal difference. How a couple of weeks make a difference eh...

BR sort of jinxed his team when he said that Leicester would aim to end our unbeaten run. If any, his team is perfectly set up for us to take advantage of.

Next up, another tough opponent in Wolves, and then, against the second best defence in the league, Sheffield.

According to Bluemoon before the game we were just a modern day one dimensional Wimbledon. LOL

Rooster said:
Shades of the magnificent 5-0 over Forest that I never forget.
Click to expand...

Good shout, we were absolutely magnificent. 9/10 a point off for the finishing.

5-10 years down the line this game would be referred to as 'The TAA game'.

What a game. What a team.

Unfortunately I wasn't able to watch th match but it does seem like we are finally hitting our stride. All season so far I've been annoying the bloke I work with by saying " Yeah we're unbeaten but just wait until we actually we start playing well.

Before the game I would have taken a point. I thought we could well win it, as we were passing all tests put before us, as the manager said, but I half wondered if the exertion of becoming World Champions might see a subdued performance.

Full credit to this amazing team!

I was slightly frustrated at half time as we should have been 2-3 up, and when it’s only one goal you are vulnerable to not getting what you deserve. But not this team. Gomez and Van Dijk are looking the part again, and that gives the team a great platform to do its thing. 4-0 away at the team in second place, and we bossed it from start to finish.

I had Trent, Henderson and Bobby as my three.

Mo looked gutted when he came off. I hope it was just a top player not getting his goal/s and so was frustrated with himself, but I sense a little more. I hope I’m wrong on that, but since Mo had his massive season, and looked very much the heir apparent to Messi and Ronaldo as the world’s best, he has slipped back a bit, and must now settle for being one of the best 10 on the planet. He is a very good player indeed, but he looks to me like he is a little bit dissatisfied with his current lot - not so much our team, or the manager, or anything like that... but more his own contribution and his own level. Hopefully being part of an incredible thing will more than make up for any personal hang ups Mo has right now, but it doesn’t look 100% with him to my eyes.

Anyway, could be something and nothing, but it won’t disrupt what this team is doing. Only after the fact do you really know it, but this season very much feels like we are witnessing a great chapter of our history being written before our eyes.

Still fucking shaking... can't believe how good this side is. As for Trent, as Klopp would say wow.
Oh, and another clean sheet when Gomez starts.

wow...what a performance!! keita what a good game...

Limiescouse said:
When Gomes is on form like he's looked the last few games this is a sensational CB partnership.
Click to expand...

We do have quite a few sensational cb partnerships. That's what Virgil does

3 shots, 0 on target. This was the best that the 2nd team in the PL could manage.
Truely a masterclass performance. Simply in awe.

macca1970 said:
The TAA goal summed him up for me.

Been running all game, and yet with 3 goals up and the game aproaching the final stages, he still has the desire to make a 60 yard run, and then the technical ability to just side foot the finsh into the corner of the net. Sublime.
Click to expand...

I think it sums the whole team up to be honest. But TAA was immense tonight

Such a commanding performance... makes Leicester look like a S-league team in my country.
Some day in some football team around the world, the coach will use this match as "football101" in their training ground.

TAA, Hendo and Firmina are my choice for MoTM.

The best is yet to come ⚽ 6 times cl wins

Ray_Chua said:
Such a commanding performance... makes Leicester look like a S-league team in my country.
Some day in some football team around the world, the coach will use this match as "football101" in their training ground.

TAA, Hendo and Firmina are my choice for MoTM.
Click to expand...

Haha. I woukd not say sleague. Even sleague have 1 shot on target. The best match so far. No shot on target for leicester.. van djik and gomez are getting back to last season first half form. If everything goes well, we will win the league after game 34 if the lead maintains

1. I don't know what Gini does, but we play better football with him there.
Click to expand...

now you're gonna believe us

The rest is speculation

SithBaare said:
We do have quite a few sensational cb partnerships. That's what Virgil does
Click to expand...

I find it fascinating to watch how top level professionals react to each other. The people on that pitch today are really in the elite, especially those in the red, yet there is not a player who fails to have a little bit of awe around Virgil. I mean Robbo is the best LB in the world and at the end of the game gets a hug from him and reacts like he's a ball boy who just got recognition from his favourite player. There is something remarkable about top players responding to another player like that.

There is a great conversation between Klopp and Roger Bennett about why he stood his ground and waited until January to get Virgil after the move broke down in the summer. It's difficult to paraphrase what Klopp said, but he basically said "have you seen him"?
B

I thought this was one of the best performances this season.
Keita was magnificent as was TAA and Firminho.
How many clean sheets is that for Gomez in the PL in a row 4 or 5? It will be hard for Matip or Lovren to dislodge him now - which is how it should be.
Still have Fab and Ox to return and Minamino to show us his skills.
Without doubt one of the greatest teams of the PL era.

Am at 60 min of re-watching this. You look at the talk on this board 3 years ago about midfield options and I would be shocked that people would consider a midfield three of Henderson and Wijnaldum and Keita would be running away with the EPL title...

Yet here we are. Gini absolutely everywhere.

Snapped a great photo after the game 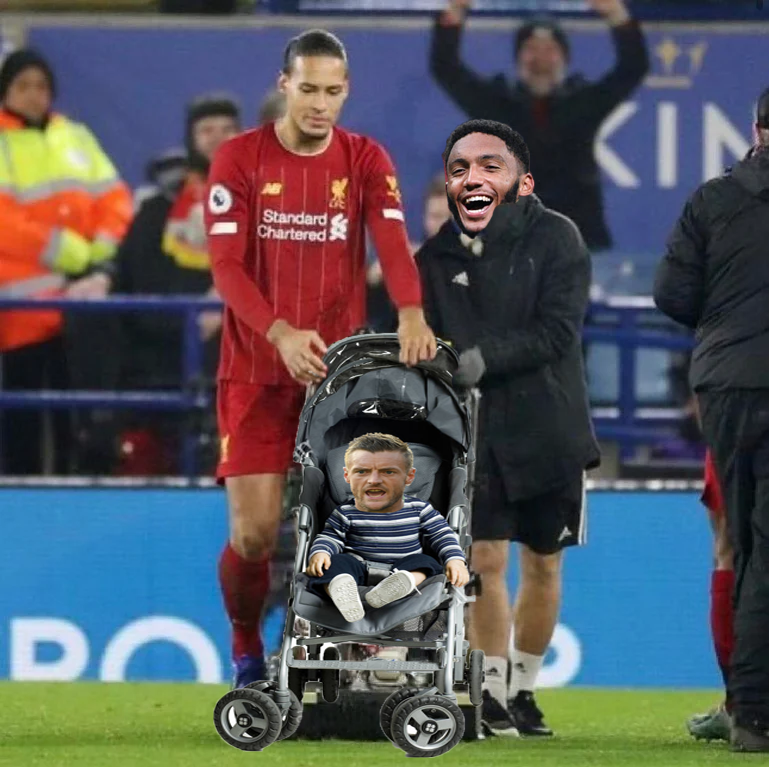 Genius said:
Snapped a great photo after the game

Probably photoshopped. Not sure gomez is this short


SBYM said:
They'll have a silver-plated spring in their steps this week and will twat the Foxes off the park.

Semmy said:
Am at 60 min of re-watching this. You look at the talk on this board 3 years ago about midfield options and I would be shocked that people would consider a midfield three of Henderson and Wijnaldum and Keita would be running away with the EPL title...

Yet here we are. Gini absolutely everywhere.
Click to expand...

People tend to be reactionary, especially football fans, and especially when certain players are seen as 'unfashionable', for want of a better word.

Character means a lot in sport, and two of the above have it in spades...(we haven't seen enough of Naby yet...)

I've pointed this out before, but I remember clearly when people were convinced in his first season that Bobby wouldn't make it in the PL.

Personally I thought that was a master class. Our finishing in the first half the only reason I won’t say it’s a 10/10 but a 9.9/10.
Nothing else for me to add that’s not already been said but I do like this amazon coverage.

legalalien said:
Unfortunately I wasn't able to watch th match but it does seem like we are finally hitting our stride. All season so far I've been annoying the bloke I work with by saying " Yeah we're unbeaten but just wait until we actually we start playing well.

He's gonna love talking to you on Monday morning.

I don't visit that rag's website on principle but based on the title they must have observed the same thing seen from that corner of the ground that found its way onto Twitter. Three busybodies with mowers cutting grass that was reserved for our lads celebrations. Dickheads.

Amazon Prime made a good impression this month.

You know what was lovely, they didn't cut away from the pre-match in stadium atmosphere. Instead of being told about the latest betting odds or just going to an advert break they let us see the entire light show, the fireworks, hear the crowd and get a feel for how the atmosphere on the night was.

Also noticed in the Man Utd game that they didn't mute the crowd so that when Greenwood scored there was a roar that was much more natural than the little "Yay!" We normally hear so as not to interrupt Martin Tyler's moment.

All in all Amazon just set the bar for user experience a bit higher than Sky, BT or BBC ever have. Appreciate we are living on borrowed time for them "giving away" the matches as part of Amazon Prime but for now it is clearly the superior service and at a cheaper price.

Been on the r lad and just got to watch the game.
A masterclass in destruction in any language.
The lads are on fire just now ,most putting in serious efforts so MOTM is hard.
Thought about Bobby,seems back in the groove,TAA certainly a game he’ll remember,Gomez,Matip is looking like he’ll have to nobble Gomez to get His spot back.But in the end went for Hendo,imperv today.

Semmy said:
Am at 60 min of re-watching this. You look at the talk on this board 3 years ago about midfield options and I would be shocked that people would consider a midfield three of Henderson and Wijnaldum and Keita would be running away with the EPL title...

Yet here we are. Gini absolutely everywhere.
Click to expand...

Gini came to liverpool as a boy, dude is now a man... he has matured so much not only as a player but as a person as well. Carries himself differently as well. I know its cliche but keita is like a new signing. His driving runs from the middle force the opposition to be honest and not clog the wings

Minamino and keita will cause havoc in the new year as teams will be forced to either clog the middle or the wings. Last year we struggled when teams shut down the wings, but not anymore
You must log in or register to reply here.
Share:
Reddit Pinterest Tumblr WhatsApp Email Link