Can’t recomend reading the comments on red cafe tonight highly enough. Much better than anything that’s on the telly. Lifelong manc fans properly close to the edge.

20 years of Hilsborough chants, cheating “Fergie time” and and that last minute winner in the champions league final. Tonight’s the time to remember all of that and more. Drink it all in whilst it lasts.

Keita was part of a very impressive midfield in the first half. As the second half wore on he faded from the game and Klopp made the right change at the right time. The lad is looking good and is going to be an important member of our matchday squad going forward.

The Red From NZ

Welcome to Liverpool Mr Fabinho. What a performance, was everywhere, pushing forward and then tracking back. That's what we've been waiting for, he was a beast.
I

Blew them away
C

Makes a change for the ball to hit somebody in the head instead of his elbow!
I

Fabinho and keita showed today why we spent big on them. Though fabinho was brillant

Caradoc said:
Keita was part of a very impressive midfield in the first half. As the second half wore on he faded from the game and Klopp made the right change at the right time. The lad is looking good and is going to be an important member of our matchday squad going forward.
Click to expand...

Hate to say, he was operating more of a LW than a midfielder in that 4-2-3-1. Somewhat tucked similar in position to what Phil used to do but he hasn't got the swing of it yet, how to take up good shooting positions where it drags a defender out to challenge and exploit space behind. If he can figure that bit out, and link up with Salah/Bobby they will rip apart some back lines in the second half of the season.

Similar to how Shaq operated when he came on, Mane got shifted to LW when the change was made?

The sweetest of them all,but how it was done made it so much sweeter.
36 shots on goal FFS,that will haunt the Mancs for a long time to come.
Tactics were spot on,Clyne looked like he'd been playing all year,Fabinho really starting to look the goods,Mane good,Shaq on fire when he came on,a bit of luck but he rode it.The sign of quality.
Alisson one horrible moment,but it happens.
I

Ha ha. You joke but somebody on here will be the first to forget about today and say it one day. Somebody maybe someday a few weeks or months from now but it will happen.

outstanding the first 25 mins,didnt think utd offered any great threat to be honest,our final ball was not good again,as werent corners or shooting,so we still have massive improvement in us.
i must say thought clyne was very good for first game back,and lovren did well coming in,virgil class as always,robertson was non stop as usual but more wasteful today,keita shows glimpses,bobby seems to be getting back to his best,i must say i thought mo was awful today,shaquri a real super sub,but my mom without doubt was fabinho,oozed class today,bossed midfield and some of his passes were excellent.

oh and i left out gini,dont normally think he offers that much but he was actually outstanding today,one of his best games in a liverpool shirt.

Walshy07 said:
Special mention for Clyne who I thought would have to come off after about 60.
No idea what utds tactics were - leaving Robertson free all game???
Click to expand...

Clyne might have had a hard time if they had mounted any real attacking pressure. As it was, he had to cover a couple of counters, make a couple of tackles, but never had that sustained period of running that can make the fullback position so demanding - particularly not having any recent game conditioning. Crazy as it sounds, that was the ideal match for him to start to rebuild conditioning. I thought the plan would be to have Martial go at him late, which appears to be what Mourinho intended, but the 3rd goal crushed any remaining belief.

To be fair, Robertson kept running away. What were they supposed to do, chase him?

It's been Sadio, but anyway, love it lol

epsomred said:
Ha ha. You joke but somebody on here will be the first to forget about today and say it one day. Somebody maybe someday a few weeks or months from now but it will happen.
Click to expand...

Belief .what a week
Booooooooooommmm
V

Mada said:
The fact that he still has his job is "fortunate".
Click to expand... 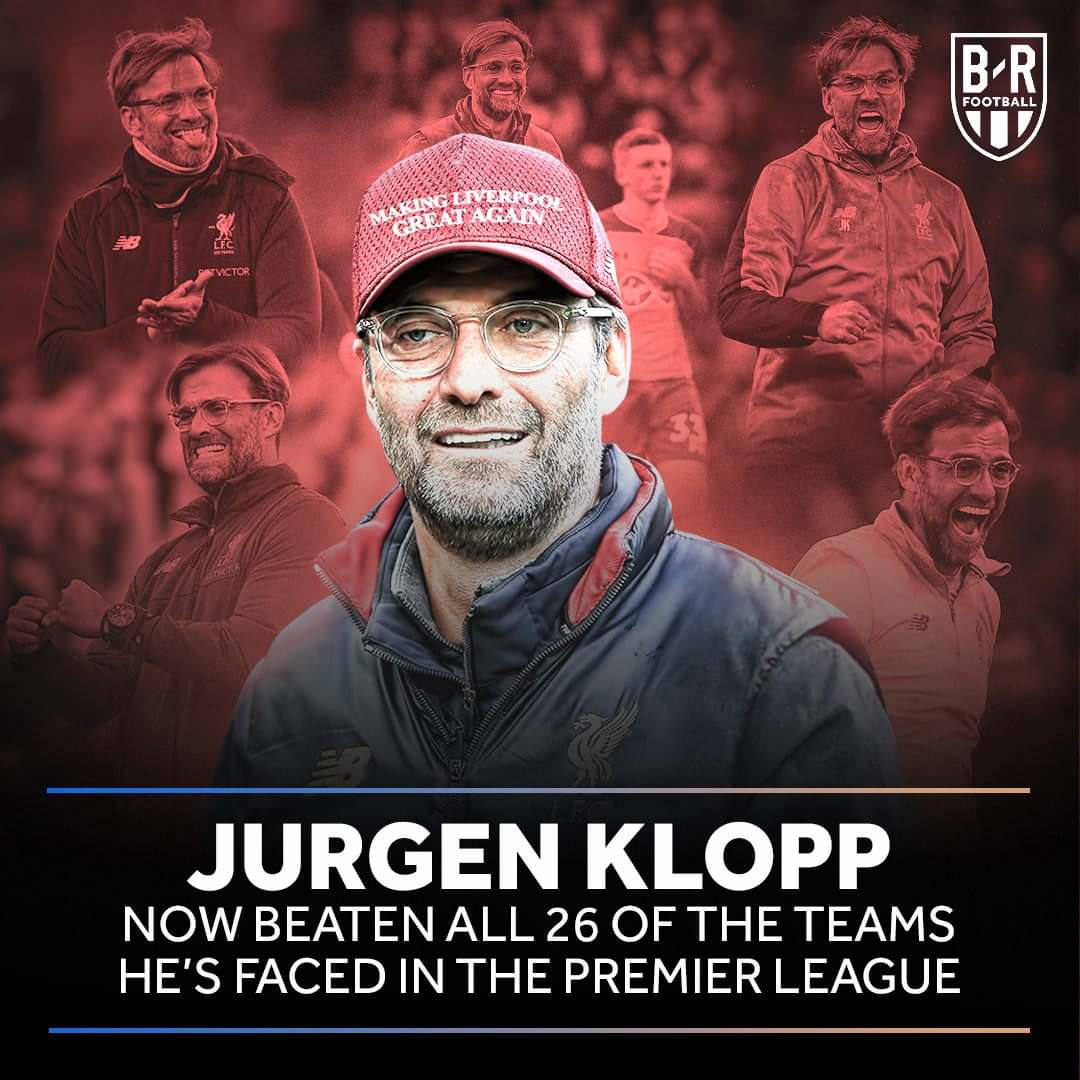 Just one more thought for tonight: why is Mourinho referred to as the "Special One". Is it a euphemism for mentally handicapped?

Fabulous performance, fabulous result. All credit to all concerned. Getting MOTM ahead of a guy who scored 2 goals proves what a mammoth performance Fabinho produced. 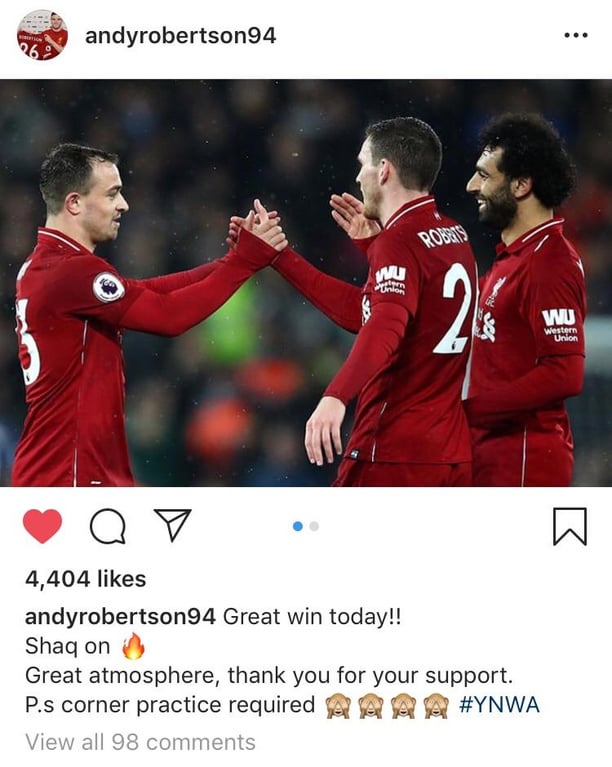 >99% chance of qualifying for the Champions League and 42% chance of winning the league.
M

We seem to have two Fabinhos in the MOTM poll and one of them is called Roberto. Can someone edit it, its doing my head in?
R

For £13m you could buy Lukaku’s left buttock, or Pogba’s right leg from the knee down.

Alternatively you could buy Shaquiri and wear a massive smile on your face.

Still buzzing with this win. Brilliant team effort. Alisson's mistake is forgiven.
What a comeback by Clyne. Fabinho was class. And what an impact by Shaqiri.

Livvy said:
It's been Sadio, but anyway, love it lol

Since when was Lovren black and wore no.10?

RodM said:
Just one more thought for tonight: why is Mourinho referred to as the "Special One". Is it a euphemism for mentally handicapped?
Click to expand...

A moniker he gave himself.

Says it all, really.

Thank you Jurgen and the boys, that was a great birthday present! Games against united are always tense affairs. The two biggest clubs in Britain have traded punches through the years. In our pomp, we hardly ever beat them because they made it their cup final. it also contributed to them going 26 years without a title because while putting everything in to beat us, they just couldnt sustain the standard over a league season.

Similarly, in the 29 years since our last title, we've never been able to sustain a level of play required over a season. We've been distracted by cup wins and settling for second best. Thankfully that all seems to be changing. After building, experimenting and enhancing in the 3 seasons he's been here, Jurgen Klopp appears to have found the magic formula needed to go the distance. His only obstacle now is Manchester City.

Look at it this way, if it wasnt for city, this Liverpool would be virtually out of sight at the top. OK, out of sight might be a little enthusiastic but could you honestly see this Liverpool side blowing a 6 point lead given who we have played away from home compared to the other challengers?

It was a lovely move that created and lead to Liverpool's first. When Mane sprinted through the packed united defence and brought the ball under control, there was no way de gea was stopping him scoring. Anfield erupted with delight and I expected the flood gates to open. But united were let back in it by a disasterous header to no one by van Dijk. From the resultant throw in they worked the ball down the right and into the box. Alisson should have been able to hold onto it but the life of a keeper is you spool it and a striker will likely score. I wouldnt give Alisson any flak for that whatsoever, the lad has tons and tons of credit in the bank even if you ignore the saves against everton and Napoli. Maybe the defence could have covered him but it was 1-1. It took the wind right out of our sail and for a brief period, it looked like the united players had a little belief.

Half time arrived and gave Jurgen chance to give the players a pep talk. While we were back on our game, we seemed to huff and puff a little and with united now having a packed defence, a way through was looking very hard. I hadnt realise it was already the 70th minute before the Shaq came on. And 3 minutes later, Anfield was rocking again. He'd injected not only pace into our game but also a little bit of unpredicatability.

Haha, what was it Jose said about Liverpool having a bit of luck!? Shaqiri's goal may have got a deflection but if you buy a raffle ticket and with united having so many men in the box etc. You make your own luck and both Shaqiri and Liverpool did just that. And in the 80th minute, the Shaq did it again, 3-1 and game over.

Have to say, Fabinho had an excellent game and in my opinion was MoTM. He was everywhere, breaking up united's play and even having a glorious rasping drive in the 2nd half. Many people seem to have written Nat Clyne off but today, he was thrust into the side and didnt let anyone down. Sure he looked a little rusty in the first 15 but I think overall he coped well. Given the run of fixtures we face, hopefully he can put in some more solid performances if called on.

Andy Robbo had another great game as well, I dont know where the lad gets his stamina from but I sure want some! van Dijk had a couple of dodgey moment but was generally solid. I just wish the lad could start scoring a few headed goals from corners. Speaking of which, I think we need a corner kick coach because virtually every one was rubbish. Again.

Lovren looked as nervous as a kitten to me and one hopes Gomez's 6 weeks absence passes quickly.

Wolves away will be tough and they've gone toe to toe with the title challengers this season so Im not expecting an easy game. But, as we play first again, we need the 3 points.

SBYM said:
A moniker he gave himself.