I bet Ali is out 6 weeks at least, obviously tore something. Ugghh.

Bobby Firmino is THE MAN, what a player, talented, creative, aggressive, hard working and sometimes unbelievably sexy on the ball. Class, total class. If Ox had a brain he would take Messi's shirt down from his wall and put Bobby's up there next to Andy Robertson's.

Alright Now said:
I only needed one vote for this
Click to expand...

And I appreciate your support.

redbj said:
Worst defence in the league though.... which is a bit worrisome
Click to expand...

Wonder why Jurgen has dropped Matip?
Him and VVD had a great understanding for 6 months, it’s been disrupted and now we’re defending like Brendon’s teams.
TAA yes assist but how many times was he caught out of position?
If it’s not broke don’t fix it.
V

Livvy said:
Naaa, I've just noticed that we had a streaker on the pitch. How could I miss him? And nobody told me...

Is this Operation Anfield?

Matip has done nothing to lose his place, and I agree it’s harsh.

However I suspect the logic is that Gomez is quicker and better on the turn, so more suits the higher line than Matip.

Professional performance won it in the first half and saw it out in the second, they certainly caused us lots of problems but we coped fairly well, Trent was caught out a few times and seems to get targeted by most teams now, Hendo Firmino and Origi stood out for me. Hope Alisson is back soon.

Or second wurst, after the streaker.
L

First game into the season already seen chest-thumping crew coming right off the bat. Throwing sarcastic remarks about why not buy this, why didn't we do that and all I can say is - Wow. I thought we are in here to celebrate a win. Redforever is no longer here.....

Anyway, our goal conceded after watching it over again would not have happened if our players don't abandon their position without someone covering it for them. Robertson had a go at Origi for that goal we conceded and I thought that was a bit rich because Robertson played Pukki onside, but after watching the replay a couple of times over, I see it. There were two Norwich players at Robertson's side, he knows if they were to cross the ball at that point, our centre-half would be able to take care of it. Origi tried to win the ball back to attack, left Buenida if I am not mistaken free in the middle of the park. The ball got to Buenida who then put Pukki through. If the ball don't reach Buenida, they would have cross it and you know what happen when you lob the ball into our box - rule of thumb, if Van Dijk don't clear it, it's either an offside or a foul.

Here's the highlights... for those who didn't get a chance to watch it.

Post Match Pressie.... "it's the calf, he couldn't carry on. That's not a good sign. We'll see" Klopp's view on Alisson's injury.

That is a bit strange, Matip had been in outstanding form and we looked almost water tight also played well when on in the Community shield. 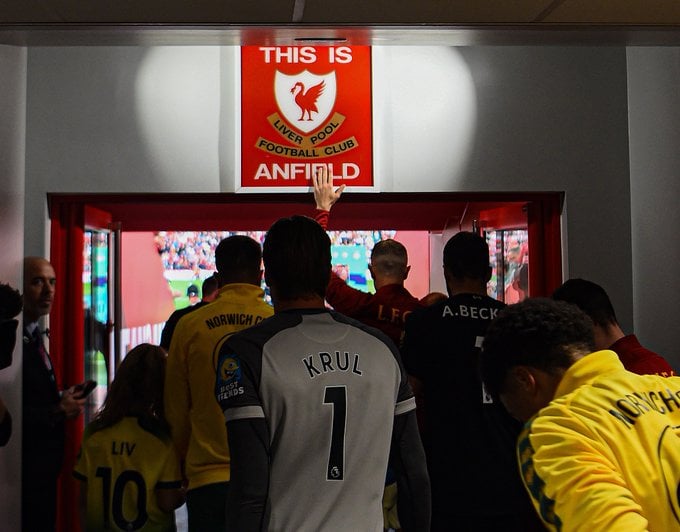 He was excellent, certain starter in central midfield alongside Fabinho.
Last edited: Aug 10, 2019

Really loved the way the game went for us last night. Being still very much pre-season I won't comment at all on the rustiness of some players and am very happy that we could win the game in 45 minutes. These can go either way
A

Because Gomez proved that he was Klopps first choice beside VVD in the first half of last season and only lost his spot when he got injured in the Burnley game which allowed Matip to get a chance playing beside VVD. Had it not been for that injury, Gomez would have retained his role in the heart of defence

Mascot88 said:
Matip has done nothing to lose his place, and I agree it’s harsh.

However I suspect the logic is that Gomez is quicker and better on the turn, so more suits the higher line than Matip.
Click to expand...

Whilst offensively Trent offers a lot, I think we need a short spell with Gomez at right back and Matip center back to get back the groove of our defensive shape. Trent constantly lost his man or played them onside - A better team (like City did) will have a field day down his side.

Robertson was back to his best - Marauding at the business end and resolute at the other.
J

Credit to Norwich, they came and had a go but in reality it was a lesson in how not to play at Anfield because they were dead and buried by half time.
Thought Hendo and Bobby were outstanding.
We got a bit sloppy for 15 minutes in the 2nd half but over-all we looked fitter and more fluent than I expected. Shame about Allison but Adrian will be ok, he seemed quite vocal and composed with the ball at his feet.
Smash the rent boys in Istanbul and we're off to a great start.

There are only 37 matches to go. Before we are crowned PL champions.

Great to start with a good win , sad that Alison got injured. Hope he recovers quickly.
I said yesterday I was a bit concerned about Trent and Fab and I still feel the same. Trent does not look as sharp and quick as last season and Fab , IMO , is not helping the back 4 as he should. Looks abit slow and lethargic. Obviously both had some good moments but they will have to do better if weare to winanything serious. For me Gini had his usual patchy game, a touch of class here and there but missing for long periods.

That went pretty much as expected, apart from the misfortune of losing Alisson. Very good at going forward, very bad at defending. Klopp needs to sort out the latter as soon as possible because few other teams are going to adopt Norwich's admirable but naive approach of coming straight at us. Had they scored first, as they could have easily done, it would have been a totally different game.

Needless to say that Alisson's injury is big blow, especially if it's long-term. Perhaps it's time to drop the higher line?

As good as Firmino was, I thought Fabinho was next level. My 3 are Fab, Bobby and Origi in that order.
L

Gone Kloppo said:
As good as Firmino was, I thought Fabinho was next level. My 3 are Fab, Bobby and Origi in that order.
Click to expand...

Yeah he got my vote for man of the match as well. If any player go up face-to-face against him, chances are you would lose the ball and fall flat on your face. Muscling, aerial or quick feet, he seemed to be very well prepared for all of them. Anticipate the move very well too, and either nicking the ball off the opposing players or intercept it.


He was excellent, certain starter in central midfield alongside Fabinho.
Click to expand...

There's something in my eye!!!

Chewbazza said:
Respect to Norwich for not parking the bus and going for an early point on the board.

They had a couple of okay players.

Good result, looking rusty in parts so can on!y get better. No real 'non-stand out' player on the pitch for me, strange. Disappointed that after going in 4 up we didn't go on to make statement by adding another 4 in the second half, now that would have made the other teams pay attention.
Obviously Allison's injury takes the shine off somewhat, hope it's nothing majorly serious and he'll be back in a couple of weeks.
L

I think he doesn't like their fans.... I for one would love it if they stay up and we keep hitting 4-5 goals past them every time we play against them. That's a much better slap on the face for their fans than seeing them fall back to the Championship.
I

Lovren and Lallana and none of the youngsters made it to the bench. I think we’re well equipped for a long season.

Chatting by Physio brother and he reckons Allison snapped an Achilles and if he did its a season long recovery. I hope the fuck my brother is a shit Physio.
Great win, 3 points, we're on our way.

A Realist is a Pessimist with Experiance!

Livvy said:
Did you notice this?

Our defense will settle, I am not worried at all. Only worry is Alisson, I hope it's nothing too serious.
Click to expand...

A Realist is a Pessimist with Experiance!

Dane said:
It's not a sprint, it's a Marathon
Click to expand...

It's only the us "Old bastards " that are going to get that one. lollol