This kinda distorts our shape in the middle...

Red Ted said:
Will take it but this isn't good, we need to improve especially in midfield, they are more snappy and up for it in there, was hoping for more from Keita, none of them clicking up front hence the lack of any chances.
Click to expand...

It’s fine. We away from home in the early kick against the side in seventh in horrible conditions.

Alright Now said:
You don't have a TV in your shower?
Click to expand...

indianscouser said:
Yea. For us, with a limited squad compared to city, we need all our ace players fit for the entire season if we are to have any chance. And makes sense to stop the ppressing as it saps a lot of energy. Who knows, maybe we will revisit it in the 2nd half of the season.
Click to expand...

Jurgen mentioned in a recent interview that the press was futile given the way most teams were choosing to play us. But he did make your point that it may make its return later in the season.

I missed the first half, how are we doing?

Red Ted said:
You've got to have shots at goal to do that, they were our only 2 weren't they?

Bournemouth have to open up so that'll help 2nd half.

We didn't have many shots but I didn't see that half ending 0-0.

SBYM said:
Was it offside? Missed the goal...
Click to expand...

Salah was a half step offside on his run behind when Firmino shit, Begovic gave up a big fat rebound, Salah pounced.

Hard one to call in real time, because the official is focusing on the ball. But between that and Milner's tackle, we cannot complain about the officiating.

I think that the lads have done really well so far. Just like Burnley, Bournemouth are up for it, propose a physical challenge and try to put us under pressure. But unlike Burnley, they are a team in good form right now, with high confidence, and a genuine collective ability to move the ball around.

Despite of this, our lads have played better than at Burnley the other day. Again roughly 75% possession of the ball, and Bournemouth's commitment is matched by our lads so far. The goal shouldn't have stood of course, but on balance, the lead is not undeserved.

Towards the end of the half, conditions worsened a bit (much wind) and it seemed to give Bournemouth a bit more belief, and they put our lads under a lot of pressure, which was well dealt with to be fair.

For the second half, our players need to stay committed, and watch for the space and time opening up for them, as Bournemouth will need to come out, and will inevitably tire down with the half going on. Hopefully our lads can pounce on the chances they'll get. Fingers crossed!

charleslee89 said:
This kinda distorts our shape in the middle...
Click to expand...

We seem to be doing fine though since they're hardly attacking from the wings. It might change in the second half but most of their attack has come through the middle and so the gap left at right bank hasn't really troubled us much.

Livvy said:
I missed the first half, how are we doing?
Click to expand...

Arminius said:
But between that and Milner's tackle, we cannot complain about the officiating.
Click to expand...

I'm sure we'll be able to find something...

Livvy said:
I missed the first half, how are we doing?
Click to expand...

Depends whom you're asking. I think well. We seem crisper to me. But Bournemouth is playing well also. So there's that.

Ok lads, crucial 2nd half coming up. Get it done

I'm really getting used to this winning thing, don't think we should stop now

Solid match so far , a bit lucky with the goal considering a possible offside call. Otherwise I'd like to see a bit more short passing into movement - there have been glimpses and a few good runs , but a lot of it ends in either confusion or been ignored by the passer in favour of the safe pass back or sideways.
I feel we're going to need at least a 2nd one. In conditions like this any freak ball accident can cost us 2 points without anyone really at fault. Some of the long balls took weird flightpaths. Bournemouth are still very passive , but I wouldn't rule out them scoring from a counter either. It all looks a bit to cosy for me to buy into it atm.

Positional mapping for those asking 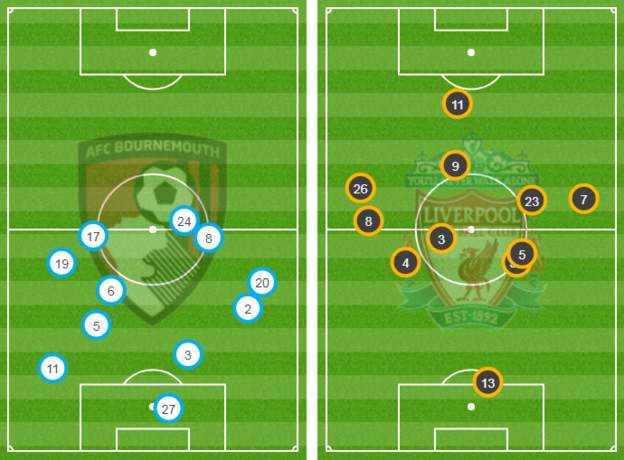 Interesting stat just popped up on my screen: first match this season @indianscouser has not called for a sub in the first half.:well done:

And people still dont’ believe Salah is our no.9

Played alright, not great but had a decent amount of control. A couple of dodgy defensive moments, the Milner slice was a bit mental but the big pink fellah between the sticks just emptied their lad with that header. Hopefully they’ll come out and play a bit more and we can pick them off.

Mascot88 said:
It’s fine. We away from home in the early kick against the side in seventh in horrible conditions.
Click to expand...

Will take 0-1 every time but it talk of best first half performances is way off, nothing is happening up top but it should be better 2nd half.
C

Alright Now said:
Interesting stat just popped up on my screen: first match this season @indianscouser has not called for a sub in the first half.:well done:
Click to expand...

Has been a weird half so far....We are doing ok but not really well...

basil1492 said:
Have to say i've not watched Bournemouth for a while but is this amount of effort theyre putting in usual? Surely they can't keep this up all game. They seem to have 8 men in attack and 8 in defence.
Click to expand...

Need to move the ball quicker, and more progressively. Giving them too much time to get back in to shape!

That's quite interesting, I felt like we were playing a conventional 442 and occasionally switching to 4411 but looking at that heatmap I am quite wrong!
C

I’d like to see Naby being involved more in areas and plays where he can do some damage.

Alright Now said:
Interesting stat just popped up on my screen: first match this season @indianscouser has not called for a sub in the first half.:well done:
Click to expand...

I wanted to say sub wijnaldum, but didn't know whom to bring on. lol

Ya beauty....with an ankle tapper aswell

What a goal salah. Fuck. That was mesmerising