Young Boys are currently fifth in their league table, with only 12 points from eight game, which is disappointing for their standards. Today, they beat minnows Wettswil at their ground 5-1 in the Swiss Cup.

Similarly to us, they have a big league match coming up against Basel on Sunday, so they will maybe not necessarily field their best team against us.

The Wankdorf stadium can host 30'000 fans. For the time being, 25'000 tickets have been sold, so it will be a near sell-out come thursday, and thus, probably a good atmosphere. 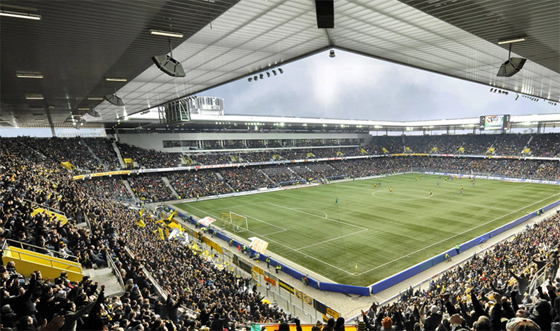 So, get it away lads. What formation should we play in order to get something out of this game?

My opinion is that this is definitely one for the players usually on the bench, and for some youngsters. Looking at today's starting line-up against Sunderland, and keeping next Sunday's game against the mancs in mind, it could be something like this:​

I'm going to Berne and will support the Reds in the stands for this one, so am hoping for an entertaining match, and of course, three points for the Reds!

Isn't Assaidi able to play now? If so, I would be shocked if he is not in the 11.

I am quite jealous of all those traveling fans this week. I have always want to go to Berne, it is continuously rated as a city with high quality of life.

Considering we have ManU on Sunday, this is what I expect to see Rodgers set out:

This is what I think we'll see:

I'd rather see Yesil play than Ngoo or Morgan. He looks promising; seems to finish a bit better than the other two and god knows we need somebody who can put the ball in the damn net.

^^^ Agree with this and the sentiment expressed, good time to give Assaidi and Yesil a run.

red to the bone

Hope in your heart said:
The Wankdorf stadium can host 30'000 fans.
Click to expand...

Wankdorf? It must be German for Old Trafford.

Nothing weird at all about wanting our lads to spank young boys while 30,000 look on in excitement in Wankdorf...

My main hope is that Gerrard doesn't play - think it's essential he's kept fresh for the United game.

Otherwise, I'd love to see Yesil and Pacheco get run-outs.

It's a pity that the United game follows this one as I'd like to see us take this competition seriously and not field a team of youngsters. As it is, we have no choice and will have to keep our star players in cotton wool for the big one.

It bothers me a bit that a lot of fans seem to be dismissive of the EL. Around Europe it carries a lot more weight than the League Cup, or even the FA Cup, and winning it would send out the signal that we're back, and would make it easier for us to get more highly rated players. I'd like to see us put out the strongest team possible in every EL match, especially the away games, and save giving game time to the youngsters for the domestic cups.

Dublin_Kopite said:
Nothing weird at all about wanting our lads to spank young boys while 30,000 look on in excitement in Wankdorf...
Click to expand...

i just cant see us being able to penetrate young boys.

Want to see Suso, Assaidi and Sahin get a run out. In some ways we could use this competition to see if some of our younger players are going to make the grade or will be playing elsewhere in the future. Morgan and Pacheco are two that come to mind.

I think if we go with our main strategy of maintaing ball possession the young boys defence will eventually lax.

Did we play these before under Houllier?

I'm pretty sure I remember us playing with young boys on a dark Thursday night on some shitty channel a few years back..

Some dodgy google results coming back....

I don't know, our away kit does look alot like a priests outfit, if we had white collars I'm sure we'd tear them a new one!

Genuinely hope we don't take Gerrard or Suarez even on this trip.

I'd also like to see Brad Jones start in goal (one of Kenny's mistakes was using Reina for all games in Cup, meaning when Reina was out the others had no playing time for over a year).

Could play Borini so he can hopefully get a goal and some confidence, but rest is probably more important with Mancs in mind.

So, here's my wishful team with all that in mind;

I'm all for giving Yesil a go. At least he's a striker.

There's a danger that this thread will look as if it's been highjacked by a load of paedos - with all this mention of spanking of young boys at a stadium called Wankdorf.
Perhaps they'll make a Carry On film of this tie (a two-parter).

Seroiusly though, I hope Assaidi and Yesil get a look in.
Boroni will no doubt start, so hopefully, he'll get a goal or two.
Perhaps Downing will rea;lise that he's a footballer.
We need to go back to Anfield with a lead.

Did a job in Wankdorf once, great story to tell . On a par with driving a Mazda RX7/8, petrol heads will know why

Play the kids, they're the best shot we have at the moment of getting a good striker.

FSG are the iluminati

I dated a girl for Berne, if they play as good as she looked we're in trouble (meaning they'll play attractive stuff but lack endurance due to smoking a pack a day).

That being said, swiss german is less attractive than german german.
G

I'd rather play Suso first before Yesil. Downing on the left since Sterling needs a rest.

Hopefully this is not a strategy for success this year! LOL

Regarding our Pepe, I suggest that this is not the time to "avoid" playing him, nor giving him a break.

Now is the time to stick with him and hope to do whatever possible to shut down an opponent. Completely.

So we can defend well against that team we are up against on Sunday.

I don't think we will play Robinson or Morgan, possibly not Suso . Fact is the U19's go to Milan on Wednsday night
I think we may see something like this.

Although Suso is young enough I see he is not in the squad.

Quick look at the team...

Coates to certainly start, probably with Carragher as well. I'd keep Kelly, he did (as expected, as McClean's dribbling stuff is mainly one dimensional and relishes a physical challenge, which Martin dealt with very well) well and Johnson could do with a little break after the 3 full 90 minutes he's had lately.

So with 3 full senior players in there, I think we can afford to give Robinson (also a positive performance for the Reserves against Chelsea) a start in this one if he's ready, also to have Enrique fully fit and secure for United as if we start Sterling in that game it would be good for him to have Jose back behind him. Or Downing is also an option, but I'd prefer to have him as a wing option in this away fixture which won't be an easy ground and all that and we're really short in the front areas, while we also need to rotate.

Midfield is also a wee bit tricky area now, Gerrard needs to be left out or at most be on the bench. Shelvey follows up, we need to see what's the situation with him. Allen can cope I think the best out of them all purely because of his position, the way he understands what Brendan wants from him and his style. Henderson and Sahin should all be in there pushing for a start, at least one of them.

Keep Sterling on the bench, so there will be some minutes or a start for Assaidi. Hopefully we can include someone like Suso, Pacheco or Ngoo/Morgan/whoever of the younger strikers Brendan wants to give a chance to on the bench. Borini should be able to lead the line and then also be in contention for a start next weekend.

Without wanting to take this thread even further down the wrong path, these guys are probably the 'whipping boys' of the group, so will be a good test for the youngsters that should play. I wouldn't let anyone who should be playing against the mancs anywhere near this one.