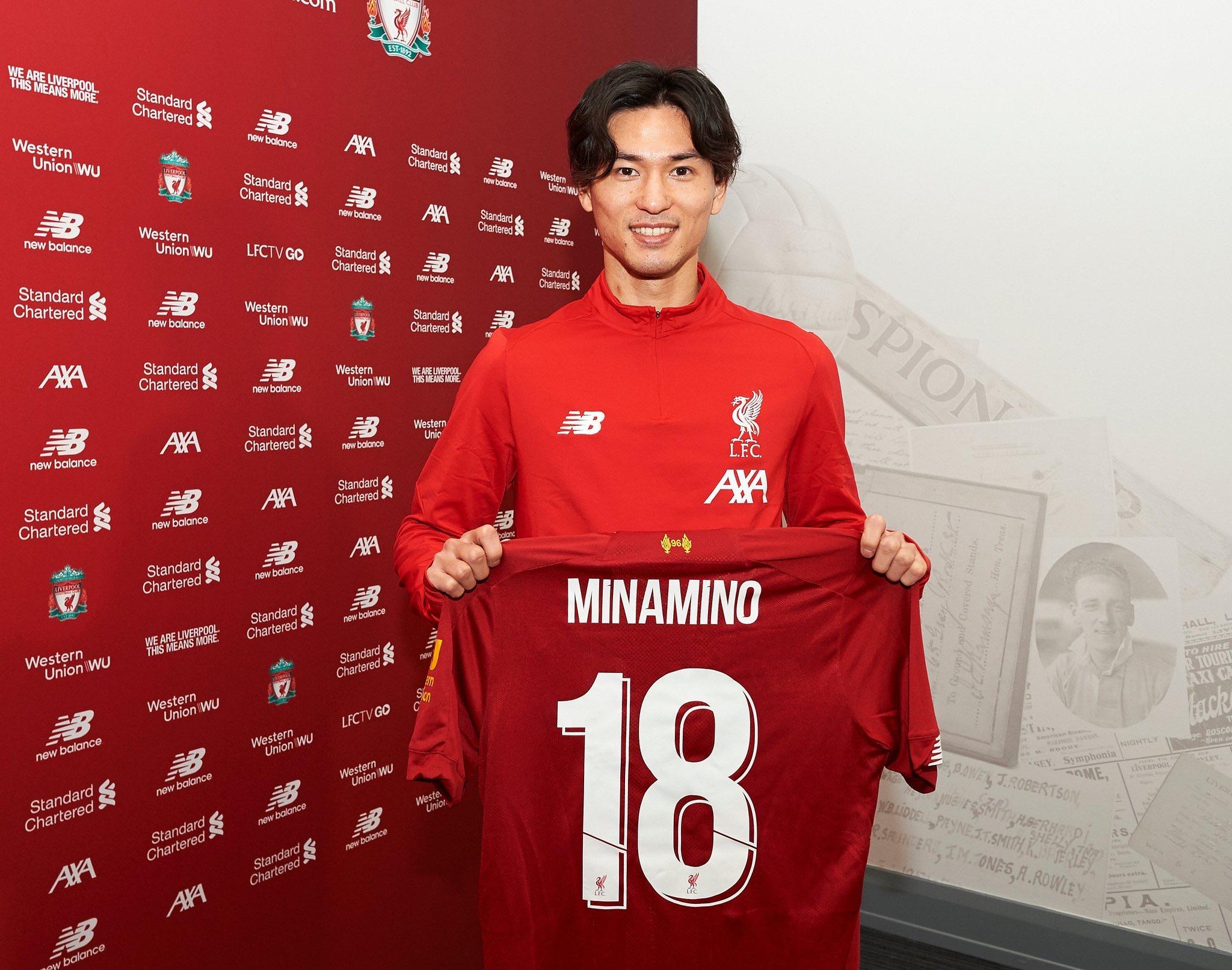 Liverpool Football Club can confirm an agreement has been reached with Red Bull Salzburg for the transfer of Takumi Minamino.

The Japan international forward will officially become a Reds player on January 1 after he finalised personal terms and passed a medical on Merseyside on Wednesday.

The Japan international forward will officially become a Reds player on January 1 after he finalised personal terms and passed a medical on Merseyside on Wednesday.

Minamino told Liverpoolfc.com: “It has been a dream, my dream to become a Liverpool player. And I’m so excited that the moment has come true.

“But I never thought I would be able to play in this team and I’m really happy about it. I’m looking forward to it.”


Minamino has faced Liverpool twice this season while lining up for Salzburg in the Champions League group-stage encounters.

Indeed, the 24-year-old was on the scoresheet in the meeting at Anfield in October when he struck to help the Austrian side fight back from three goals down to draw level at 3-3 before Mohamed Salah netted a winner.

More recently, Minamino completed the 90 minutes for Salzburg as the Reds secured a place in the last 16 of the Champions League with a 2-0 victory at Red Bull Arena on December 10.

“From those games I learned this team has such a high level of technique and intensity,” he added.

“Their football is of such a high level and I did feel that they were the champions of the Champions League. Feeling that, it makes me feel even happier that I can play in this team. I’m really happy to be part of that team.

“My target is to win the Premier League and the Champions League, and to make good contributions to the team.”


In moving to Anfield, he brings an end to his five-year spell with Die Mozartstädter, whom he joined from Cerezo Osaka in January 2015.

In total, Minamino made 199 appearances for Salzburg, scoring 64 goals, while he has earned 22 caps for Japan and netted 11 times since making his debut in October 2015.


The Japan international will join the Reds on January 1, 2020 having completed a medical and signed a long-term contract with the European champions on Wednesday.

He will arrive at Anfield having won the Austrian title every year since he moved to Salzburg in 2015, scored 64 goals in 199 appearances, and caught the eye of the continent with his performances in this season’s Champions League – including a strike against Klopp’s team.

And the Liverpool manager believes Minamino’s development at Salzburg, where Naby Keita and Sadio Mane also had spells earlier in their careers, makes him well-tuned to the requirements for the Reds.

“This is fabulous news – a wonderful signing. We are really, really happy about this,” Klopp told Liverpoolfc.com.

“Our supporters have had the chance to see him close up recently so I don’t need to sing too loudly about his qualities as they are already known.
“Takumi is a very quick, very clever player, he finds space between the lines. He is brave with the ball but also brave without the ball – a proper team player. He makes the best of himself for the benefit of others.

“His Champions League experience is a big bonus and coming from the club and organisation he does, we know he’ll be well coached, used to an elite environment and had all the right experiences.
“It is fantastic work by our football operations team in how they’ve handled this transfer. Michael Edwards and the team deserve a lot of credit.
“It’s not hard to see why Salzburg is a favoured destination for players with real talent and hunger. From our experiences dealing with, and facing, Salzburg on and off the pitch in recent months, their reputation as a benchmark modern European club will only grow.

“I’m sure all the Liverpool supporters will go out of their way to make Takumi feel at home in our amazing city and club.

“I am also pretty sure as of now we have added to our numbers of the LFC family in Japan specifically. For those who follow us now because we have one of the country’s most exciting talents, I say welcome – it’s a special club to be part of.”

To all new Japanese LFC fans wanting to join the forum: welcome to you too!

Realy happy with him, welcome!

Can he play CB?

This is my serious face

Chuffed with this signing. Can't believe how quickly and efficiently we signed him up. Great work by all involved.
I hope he can keep playing to the level he did against us for Salzburg.
Welcome to LFC Takumi!

Im glad we got this deal done and so efficiently and quickly too. If its a player Klopp really wants, our backroom guys get it done so well. It will take some time before we see him play a game for us I'm sure, but hopefully the wait will be well worth it.

Alright im just gonna take this opportunity to give him a nickname. The Scouse Samurai

Will wear the no18, previously worn by Moreno, Kuyt, Nunez, Owen, Riise and Meijer.

So going by that he'll either be fantastic or shite, no in-between

I doubt it'll be too long until he makes his debut. Bobby has been looking jaded for a while (last minute goals notwithstanding) and will benefit from some support

Craig_Johnston said:
I doubt it'll be too long until he makes his debut. Bobby has been looking jaded for a while (last minute goals notwithstanding) and will benefit from some support
Click to expand...

Will he follow in Virgil's footsteps and score against the Bitters on his debut?

Gini has the ball then passes to Mini, Mane and Mo scores.... love it

Zinedine Biscan said:
Will he follow in Virgil's footsteps and score against the Bitters on his debut?
Click to expand...

Craig_Johnston said:
Be nice to ease him in with a game against a bunch of relegation threatened losers before he has to face any real opposition
Click to expand...