Were you alive when Liverpool last won the league?

Incognito said:
Isn't there a huge chance we win this year's title just the next game after your wedding day?
You need to achieve further amazing life milestones quickly and many of 'em in that case man!
Click to expand...

I know, my life and liverpool have so much in common
I share my bday with klopp
My grandpa shares with hendo
Cant write a better script lol.

Incognito said:
Isn't there a huge chance we win this year's title just the next game after your wedding day?
You need to achieve further amazing life milestones quickly and many of 'em in that case man!
Click to expand...

For godsake, you reminded @Alright Now for the elephant ride. Now I would really need to hire an elephant or hear his moaning for the rest of my life!!

I was 26 when we last won the league title.
At one time I thought I'd never live to see it again..
Now I think I will

I think a lot of us were on the wrong side of yesterday and have switched to right side of tomorrow in two seasons! Supporting this side has taken years off me....I wish.
Last edited: Friday at 6:26 PM

rupzzz said:
Now you're 43 and a big bastard.

Or maybe one of these bastards?

Shit mate, that makes you born before 46 (well into your 70's) mate if you go back 14 league wins. Unless I counted wrong. I'm a whipper snapper compared to you. 27 when we last won the league. Knew exactly what was going on, and what it was about. We bossed shit out of everyone and were the standard all aspired to.

The next 30 years were long and hard, with the odd carrot trophy thrown here and there. Even worse watching United doing so well. Nice to see us wrap the league up so early, as I don't think I could manage a late, late, cardiac show.
Last edited: Friday at 6:30 PM
R

My first few Anfield games in the late 60s. I remember this was the old Main Stand. Roger was the man, but so was the Saint. 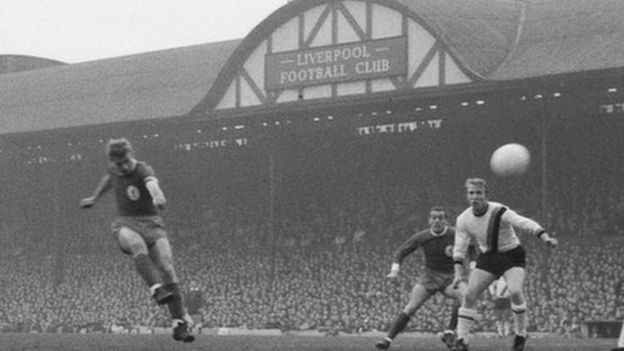 The perch is on...standby for the ride!

RedLar said:
My first few Anfield games in the late 60s. I remember this was the old Main Stand. Roger was the man, but so was the Saint.

Yes I was just over 1, but didn't start following LFC until much later when I was went to college 2008 or so.
D

I remember 1990 more significantly for Taggart almost being sacked.

Imaging if those cunts hadn't won that replay?

I was 2, so my early childhood was slim pickings LFC wise. My first memories of football were the little blow up foot balls you got in a McDonalds happy meal for USA '94 (despite England not playing in it!), my cousin having a poster of Steve McManaman with the League Cup but then the Spice Boys final and Euro '96 were really my first proper memories
S

I was over a decade late....... Last years champions league win was the first time I can fully remember Liverpool lifting a major trophy , so way too long.
D

I was 15 when we last won it. It's been a long 30 year wait! If you had told me that number 19 was going to take that long back then, I would have laughed at you.

I was 16 for our first league title

Having looked at many of the posts in this thread I now feel like a granddad to many of my fellow forummers. I was about six weeks short of my 31st birthday the last time we won the league. So, just a three-decade wait. Cue corny joke about buses.

legalalien said:
Having looked at many of the posts in this thread I now feel like a granddad to many of my fellow forummers. I was about six weeks short of my 31st birthday the last time we won the league. So, just a three-decade wait. Cue corny joke about buses.
Click to expand...

They stink of piss and the person with a personality defect always sits next to you even when empty?

I was a little kid when Liverpool last won the title, so I don't remember any football-related thing from that time. I actually started supporting the club after Houllier's treble, so my trophy count is a bit small but two Champions League titles and perhaps a Premier League title this season would make it so, so sweet and worthwhile. To think there was a twelve year period in which Liverpool won a solitary League Cup trophy, while Man United, Man City and Chelsea were sweeping up the honours... Even Arsenal were doing great in FA Cup during that period. I hope that these particular tables have turned now.

FGred said:
I was 16 for our first league title
Click to expand...

Few months later (I was 6 by then) i've watched my first football game on TV and I can still remember it. Well, that’s especially because of one incident.

That’s the game where Frank Rijkaard spit at Rudi Völler.

The next game I’ve watched was the final.

Me was 13 years of nonsense with lots of energy invested the wrong way. Still back at that time I loved watching Milan FC and Borussia Dortmund. The Milan was the best I dreamed to watch every single time if I m honest.
Now that I m a bit wiser and uglier still managed to make a couple of years before the right choice. I dare to say but that 2013-2014 football played under Rodgers was a dream stuff

Yes. That is all I have to say on that particular subject.

Reading all this I feel positively ancient,I was 40 when we last won the league!
J

I was 25. Not going to lie, there's been many a time I've contemplated the possibility I might never see another. But I'm starting to think I just might if I keep myself fit and healthy for another couple of months.
I remember every one from '72/3 onwards and can quite safely say the desperation to win another one increases every time we come close. The last 2 when we were ultimately beaten to it by those cheating manc cunts were absolute torture but at least this one looks like being less stressful, although I'm still not taking it for granted.
The one thing the 30 year wait has done is put us all in the same boat to an extent. Us 'arl arses will celebrate it every bit as much as those who have never seen one. My lad is 21 so obviously this will be his first but I don't think there'll be much difference in our emotions if and when we do get over the line.

I was about a quarter of a century old.

Last match that I went to Anfield was the Alan Hanson's Testimonial, which LFC beat England XI 3-2. I was standing at the Kop end, losing my wits with Rushie and Whelan's goals. That was the year that LFC won the 17th First Division.

I still remember the following year, how annoyed I was that we missed out by not even goal difference, but amount of goals for. I even came up with silly arguments that the league should have been awarded to the better defensive team than the Gunners.

My recollection of our 18th league trophy was very vague. It could be because I had to focus on my studying, and/or I could no longer access the match by radio (Yay Radio City of the 80s), and perhaps that there were not too many LFC matches being shown by TSN in Canada at that time (RIP Graham Leggat)?
Last edited: Monday at 1:57 AM

Anfield rd Dreamer said:
They stink of piss and the person with a personality defect always sits next to you even when empty?
Click to expand...

No. I said corny , not yuk. For example, just like the buses around here, wait thirty years for a title and then they all come at once.

I went to the deciding game away at Chelsea. Just turned up and bought a ticket at the turnstile on the day, unthinkable now. The away end was rammed. These were pre all seating days and nobody thought of the danger. Like a different world.